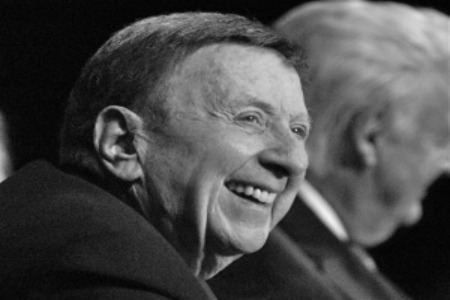 DETROIT – A public memorial is planned for long-time WWJ Newsradio 950 weatherman Sonny Eliot, who died this month at the age of 91.

Friends and colleagues, including WWJ’s Joe Donovan and Jayne Bower, will be among those remembering Sonny next Thursday at Wayne State University’s Community Arts Auditorium.

Those who plan to attend are asked to RSVP online at this link.

During the very early years of television — still in grainy black and white, and long before digital technology, the Web and smartphones — many families followed the nightly ritual of watching TV together.

For numerous Detroiters, the centerpiece of entertainment was a local weatherman who offered a fast-paced, comedic and yet informative look at the weather.

Eliot, born Marvin Schlossberg on Dec. 5, 1920, in Detroit, remembered the tough times of living through the Great Depression, then entering the military during World War II.

While serving as a B-24 pilot, a plane he was flying was shot down during a bombing mission over Germany. He was captured and endured 15 months in the Stalag Luft I prison camp before being freed by the Russians when the war ended.

Returning home after the war, Eliot pursued both his broadcasting career in radio and television and his studies at Wayne State. He appeared on “The Lone Ranger” and “The Green Hornet” radio programs, children’s programs, quiz shows and commercials.

He was one of the few broadcasters in the country who was on the air nonstop, delivering his unique brand of entertainment and information into living rooms for more than 60 years.

In 1959, he earned a bachelor’s degree from Wayne State with a major in speech communication.

Jack Lessenberry, veteran journalist and WSU interim director of journalism, described his close friend. “Sonny Eliot wasn’t only Detroit’s best-known broadcast weatherman. He invented the idea of weather forecasting as entertainment, lasted longer and dominated this major market as no one has, before or since. Yet he never forgot for a moment that he was a native Detroiter — or an alum of Wayne State University.”

During Thursday’s celebration, Eliot’s friends and colleagues will share their memories.