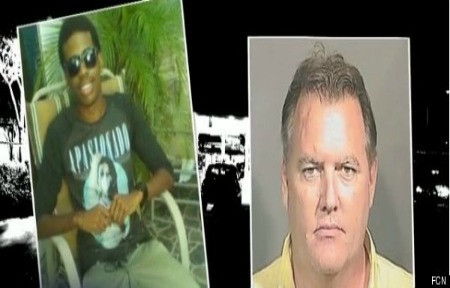 Michael Dunn, the 45- year old Florida man who is invoking the controversial ‘Stand Your Ground Law’ after the shooting of 17-year old Jordan Davis appeared in court today and is officially being charged with second degree murder.

According to Dunn’s attorney, Robin Lemonidis, he saw a shotgun in the SUV, while the teens yelled threatening, obscenities.

“Kill that mother**er, that mother**er dead, you dead bi**h, and then he sees that much of the shotgun coming up over the rim of the SUV which is up higher than his Jetta,” Lemonidis told reporters. “And it’s-all he sees are heavily tinted windows, which are up and the back windows which are down, and the car has at least four black men in it. And he doesn’t know how old anybody is, he doesn’t know anything, but he knows a shotgun when he sees one.”

Lemonidis says his client was scared after the exchange he had with Dunn. He believed that the teenagers would call friends and have him killed. After the shooting she claims Dunn fled, thinking his eight shots had only scared the teens.

“He didn’t think he had harmed anybody and he just thought he had scared them off and he wanted to report it, but he didn’t want to go in a sense throw himself to the wolves, in a strange city without representation.”

On the night of the shooting however, Dunn heard on the local news station that the shooting had been fatal. Despite this fact he fled the city, driving 159 miles to his home in Brevard County and was arrested the Saturday following the shooting.

Davis’s mother, Lucia McBath spoke out for the first time on Wednesday, on the killing of her only son.

Authorities did not find a shotgun in the teens’ vehicle.

This case once again brings into question Florida’s controversial ‘Stand Your Ground Law,’ which critics have said gives individuals the protection they need to be vigilantes. It is unclear weather or not Dunn’s self-defense claim is justified under this defense. The law itself does not specify what constitutes a person feeling ‘threatened.’

A person who is not engaged in an unlawful activity and who is attacked in any other place where he or she has a right to be has no duty to retreat and has the right to stand his or her ground and meet force with force, including deadly force if he or she reasonably believes it is necessary to do so to prevent death or great bodily harm to himself or herself or another or to prevent the commission of a forcible felony.