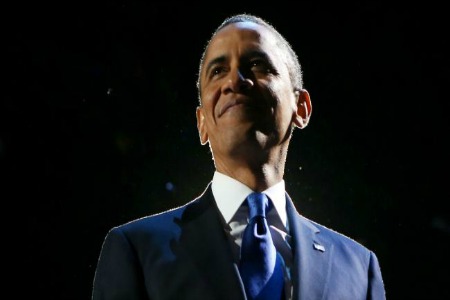 A painting of President Barack Obama in a Christ-like pose is on display in a Boston community college art gallery.

The painting, named “Truth,” features the president with a crown of thorns on his head and his arms outstretched in a fashion similar to depictions of a crucified Jesus Christ. It’s part of the “Artists on the Stump – the Road to the White House 2012″ exhibit, which will be on display at the Bunker Hill Community College Art Gallery until December 15th.

“The crucifixion of the president was meant metaphorically,” he said. “My intent was not to compare him to Jesus.”

D’Antuono actually painted the image four years ago. It was supposed to debut in New York City’s Union Square, but public outrage forced him to cancel the event.

“I always regretted cancelling my exhibit in New York because I feel my First Amendment rights should override someone’s hurt feelings,” he said. “We should celebrate the fact that we live in a country where we are given the freedom to express ourselves.”

He said this year’s exhibit has afforded him “the ability to right a wrong.”

Bill Donahue, president of the Catholic League for Religious and Civil Rights, calls D’Antuono “a left-wing artist known for exploiting racial tensions” in a statement today, referring to the artist’s painting of George Zimmerman as a Klansman and Trayvon Martin as a younger child. He wrote that D’Antuono has “succumbed to a new low” with his Obama painting.

“What makes this display so interesting is the flat denial of truth by so many artists and academicians, as well as their irrepressible hostility to Christianity. Yet when it comes to their savior, President Obama, they not only pivot, they proselytize,” Donahue wrote.

D’Antuono accused conservative media of “trying to promote the idea that liberals believe the president to literally be our savior.” He also spoke out about the 4,000 e-mail he received after his first attempt at displaying the painting, calling them “anything but Christian-like.”

“But I accepted that it is their right to express themselves and hope that they now see it in their hearts to afford me the same right,” he said.

Oscar winning actor Jamie Foxx was also criticized over a recent comparison between the president and Jesus during the 2012 BET Soul Train Awards.