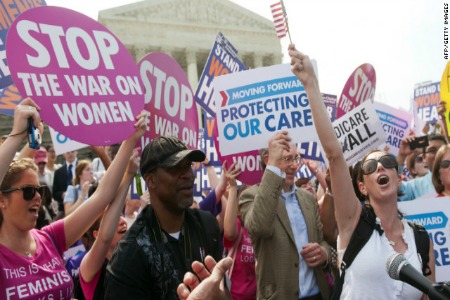 Washington (CNN) — The Supreme Court has ordered a federal appeals court to take another look at whether a key requirement in the health care reform law violates religious freedoms.

A pending lawsuit from the private Liberty University had claimed, among other things, that the law would lead to taxpayer dollars funding abortions and contraception, a claim the Obama administration rejects. The justices issued their order Monday.

The high court in June had upheld the overall law championed by President Obama, but left room for continued legal challenges to certain aspects of the law’s application.

The Lynchburg, Virginia-based school bills itself as the largest Christian evangelical college in the world.

A three-judge panel of the 4th Circuit U.S. Court of Appeals in 2011 unanimously concluded the university’s lawsuit should be blocked on jurisdictional grounds. There is no indication when the appeals court will revisit the issue in the wake of the high court’s order.

After the Supreme Court upheld the constitutionality of the Affordable Care Act’s funding mechanism — the so-called individual mandate requiring nearly all Americans to purchase health insurance or pay a financial penalty — it tossed out all other pending appeals.

Liberty University then refiled its lawsuit, saying its objections to the law should be reconsidered in light of the court’s 5-4 ruling affirming the overall law.

The school believes Americans should not be required to purchase health insurance — and employers forced to provide it — if there are legitimate moral and religious objections to some provisions.

It is one of several dozen pending lawsuits around the country filed to challenge the law’s application since the June decision. The Richmond-based appeals court taking on the Liberty University case could ask both the federal government and the school to submit updated legal arguments. The Obama administration did not object to the university asking for another chance to press its claims.