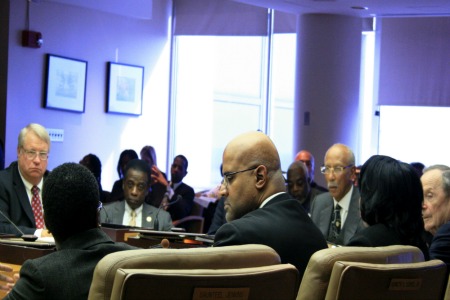 Mayor Dave Bing called the meeting last week to pressure council members to reconsider a vote on a controversial contract with Miller Canfield, a private law firm. Bing has said a passing vote is necessary for the city to receive much-needed bond funds the state is currently holding in escrow.

A law department representative said the meeting violated the open meetings act due to improper posting. Posts to notify of the meeting were not visible to the general public, according to law department official Louis Smith.
Smith said the oversight was the law department’s responsibility, as the department did not properly notify Bing of all posting requirements.

Deputy Mayor Kirk Lewis in statement said the mayor’s office consulted law dept officials before posting the meeting. It wasn’t until the meeting was ready to start that the law department brought up the oversight, he said.

“On Nov. 21, the City’s Law Department advised the Mayor’s office on specific steps to take in calling a special meeting of City Council and notifying the public. We took those steps on Nov. 21,” Lewis said.
Last week the City Council delayed a vote on the Miller Canfield contract due to a number of concerns, notably a conflict of interest.

As part of the Milestone agreement between the Snyder and Bing administrations, the City must meet a number of benchmarks in before the State approves the contract in order to receive up to $30 million the State is holding in Escrow. One of the major benchmarks is the Miller Canfield Contract.

“Mayor Bing regrets that in the midst of a financial crisis, the City’s most urgent business has once again been put on hold before the Detroit City Council, this time due to concerns raised by the City’s Law Department,” Lewis said in a statement.

Council members said they were frustrated with the legal oversight that halted Monday’s special meeting.
Councilman James Tate said he was unhappy with the way business is being handled but that ultimately all parties want the same thing.

“What it builds to is a situation where folks are under the impression that it’s [the Bing administration] versus us and I don’t think that’s the case,” Tate said. “What we have is different ideologies to get to the same goal.”

City Council President Charles Pugh suggested the city should handle its own legal affairs without seeking advice from an outside firm.

“The reality is, we have a law department that is full of competent attorneys, we should not be spending any additional money on this, truth be told,” Pugh told reporters Monday after the meeting was cancelled. “It really should not be tied to whether we get $10 million or not.”

Meanwhile, the Mayor’s Office is preparing to instate unpaid furloughs for city workers if the benchmarks set by the state are not met, and the $30 million is not released.