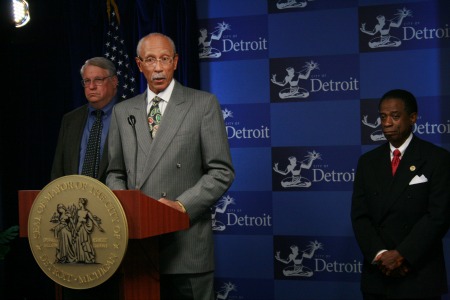 Council members voted to table a vote on the contracts Tuesday afternoon citing a number of concerns, namely a conflict of interest involving a contract with law firm Miller Canfield. Approval of the contracts is necessary for the city to receive $30 million in much-needed funds that the state is holding in escrow.

Last week the State Treasurer’s Office and the Bing Administration agreed on key “milestones” necessary for the city to receive all bond sale funds being withheld. One of them was the approval of key restructuring contracts.

“Due to the failure to meet the first milestone in our agreement with the State — and with the second milestone now at risk — I have directed my Administration to begin planning to offset an anticipated $30 million cash shortfall,” Bing told reporters at Wednesday’s press conference. “In order to compensate for the deficit, the City will begin to institute unpaid furloughs and other cost-saving actions, effective January first.”

Bing said that no revenue-generating departments or public safety workers would be affected by the furloughs.

The pay cuts are necessary to keep the City from “falling into further financial distress” according to Bing.

The Mayor said that the he did not understand why city council members thought any vote on the Miller Canfield contract would unlock funds from the state.

“The state made it very clear that they needed not only to vote on [the contract] but to pass it in order to release the money. So when people say all we had to do is vote that is not correct,” Bing said. “I’m hopeful that this could be worked out.”
While Bing said he is open to suggestions from city council on how to tweak the contracts, he said ultimately those decisions are up to the State.

“I’m open minded but by the same token, the State is holding the cards at this point,” he said.

Detroit Program Management Director Kriss Andrews said he thought all issues concerning the Miller Canfield contract had been cleared up before the council’s vote. “If there was any confusion, that’s regrettable,” said Andrews, appearing with Bing at Wednesdays conference.

Council members said they were concerned about a conflict of interest with the Miller Canfield contract since the law firm played a part in drafting contacts for both the financial stability agreement and the new milestone agreement with the State.

“I negotiated the milestones with the State Treasurer’s office. Miller Canfield was not involved in that process. I don’t see the conflict there,” Andrews said.
Andrews said he did turn in his draft of the Milestone agreement to Miller Canfield to turn it into a legal document.

Detroit Chief Financial Officer Jack Martin said the furloughs would be enough to hold the city over stating that there will be “absolutely no payless paydays and no missed debt payments”.

Bing said bankruptcy is not an option for the City of Detroit. “We’re not dealing with bankruptcy whatsoever,” he said.

Details of the furlough plan have not been worked out city officials said, but more structure will be given to the plan next week if no agreements are reached between the city council and the mayor’s office on the contracts.

Bing said he was “hopeful” that the council would approve the contracts before any unpaid furloughs are necessary.

“I’m very much frustrated,” he said regarding the city council’s delayed vote on the contracts. “It keeps us from moving forward. And every time we loose time it makes things that much more difficult.”