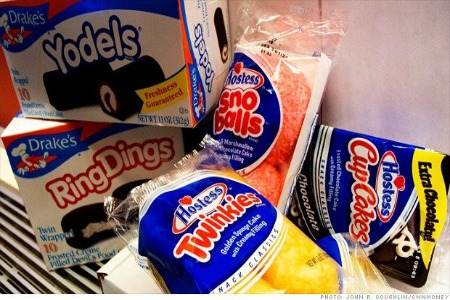 NEW YORK (CNNMoney) — Hostess Brands will ask a bankruptcy judge on Monday for approval to shut down the company and pay $1.75 million in executive bonuses.

Unions representing workers at the maker of Twinkies, Wonder Bread and Drake’s snacks are arguing against the bonuses.

But there appears little the unions can do in court to block the shutdown of Hostess or save the 18,500 jobs at the company.

At a court hearing set for 2 p.m. ET, the company will ask U.S. Bankruptcy Court Judge Robert Drain in New York to approve retention bonus payments to executives expected to oversee the shutdown of Hostess.

“The cessation of … operations is not a simple matter of turning off the lights and shutting the doors,” the company wrote in a court filing. “A freefall shutdown and fire sale liquidation” could result in damaged production equipment and the “improper disposal” of waste, the company added.

Under the plan, bonuses ranging from $7,400 to $130,500 will be paid to 19 executives. The company argues the bonuses are below market rates for such payments.

But the unions, which blame mismanagement for the company’s demise, say the bonuses are unjustified and should be rejected by the judge.

The unions filed various motions over the weekend seeking to protect pension funds and salaries under previous contracts.

But as of Monday morning no motions had been filed seeking to block the liquidation plan itself. And the unions’ statements seemed resigned to the fact that Hostess will be closed down and the hourly workers will be out of work.

The Bakery Workers union, whose Nov. 9 strike prompted Hostess management to announce the shutdown, issued a statement Saturday saying that mismanagement over a number of years is the reason the company is shutting down, not the strike.

“Hostess failed because its six management teams over the last eight years were unable to make it a profitable, successful business enterprise,” said the union.

But it said its members understood when they went on strike that a shutdown of the company would likely occur.

“They were well aware of the potential consequences of their actions but stood strong for dignity, justice and respect,” the union’s said.

Hostess has announced its intention to sell its brands, recipes for various products and other assets as a way to generate cash for its creditors. Even if the products are purchased by other companies and once again sold to consumers, it’s unlikely that the current employees will be rehired to produce or deliver those products.