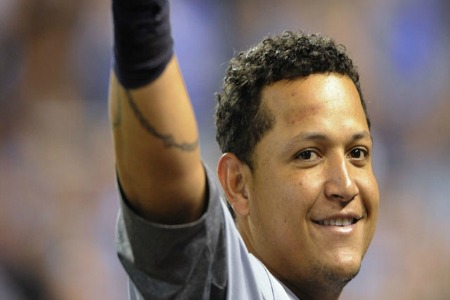 DETROIT – Miguel Cabrera was named the American League Most Valuable Player this evening in voting conducted by the Baseball Writers Association of America. The award marks his first career Most Valuable Player honor and Cabrera is the first Tigers position player to win the award since Hank Greenberg did so in 1940. Cabrera is the fourth position player in franchise history to win the award, joining Greenberg, Charlie Gehringer and Mickey Cochrane.

The batting title marked the second consecutive season Cabrera has topped the American League in hitting, becoming the first Tigers player to win back-to-back batting titles since Ty Cobb did so in three consecutive seasons from 1917-19. In addition to leading the league in batting average, home runs and RBI, he also led the league with 377 total bases, 84 extra-base hits and a .606 slugging percentage, while he finished second with 109 runs scored and 205 hits, fourth with a .393 on-base percentage and seventh with 40 doubles.