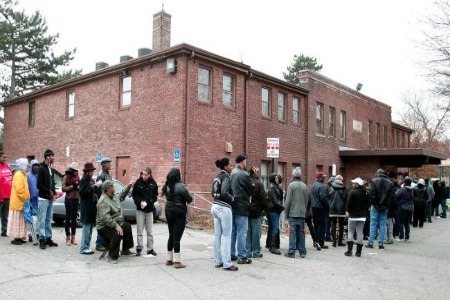 In the light of infamously slow voting lines that plagued states like Florida and Ohio this year, Coons introduced the Louis L. Redding Fair, Accurate, Secure and Timely (FAST) Voting Act of 2012, according to the Huffington Post.

It’s modeled after President Obama’s Race to the Top education program and it will reward states with federal grants if they make voting a quicker and more efficient process.

Besides long lines at the polls, which some people waited in for up to nine hours, this election season also had shorter early-voting periods, photo ID and poll location confusion, and reports of uncounted ballots.

“[The fact that] it appears that there were tens of thousands — if not hundreds of thousands — of Americans who had their right to vote denied or compromised by having to wait in line five, six, seven hours is profoundly concerning and upsetting to me,” Coons said on Capitol Hill this morning.

He added that it’s unacceptable that Florida is still experiencing voting problems 12 years after the 2000 presidential election disaster.

Coons hasn’t set a dollar amount for the grants yet, but in order to qualify for them states would need to improve their voting process by:

Providing flexible registration opportunities, including same-day registration;
Providing early voting, at a minimum of 9 of the 10 calendar days preceding an election;
Providing absentee voting, including no-excuse absentee voting;
Providing assistance to voters who do not speak English as a primary language; and
Providing assistance to voters with disabilities, including visual impairment
Other requirements include providing voting access to military members, providing formal training for election officials, and reducing wait times at the poorest performing poll locations.

“My hope is that accountability to their own voters, their constituents, will encourage governors and electoral commissions and secretaries of state and county elected officials of both parties across the country to take responsible action to deal with the widely reported and very real voter access problems of this last election,” Coons said.

Later today, Miller introduced the Streamlining and Improving Methods at Polling Locations and Early (SIMPLE) Voting Act. The act would make voting easier for individuals by requiring states to:

Provide for a minimum of 15 days of early voting in federal elections;
Ensure that each voting precinct has sufficient poll workers, voting machines and other resources to ensure that voting lines do not exceed one hour, whether on Election Day or during periods of early voting; and
Have a contingency plan in place to resolve situations in which long lines nevertheless develop
During his victory speech in Chicago on election night, President Obama mentioned the need for change in the voting process.

He said, “Whether you voted for the first time, or waited in line for a very long time — by the way, we have to fix that.”