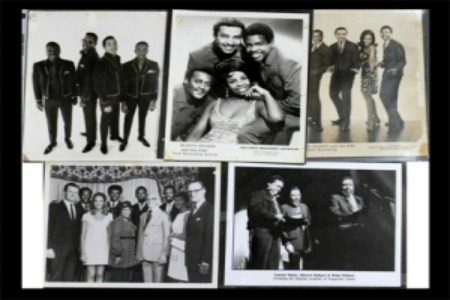 His favorite: a photo taken at Cobo Hall in 1964 following a call from a station manager of the old WKNR.

“He said Bob, come on come on! I want you to meet the Stones. They took me back stage, we met ‘em, we took this photograph,” Harris told WWJ Newsradio 950′s Sandra Mc

It was the Stones first U.S. tour. Harris said he also met Elvis, Frank Sinatra, the Beetles and pretty much “anybody who’s anybody.”

Also on the block, pics of homegrown Motown stars, Mitch Ryder and more. Harris said there’s just something about Detroit and music. “You know what I think? It’s in everybody’s genes — a Michigan thing or something.”

Bidders will find a Mickey Mantle autographed baseball, mementos of others sports stars like Gordie Howe and some signed Ernie Harwell artifacts.

For more information visit the DuMochelles auction house website at this link.