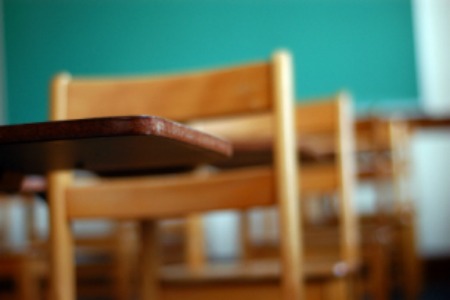 Detroit Board of Education member Elena Herrada believes the school board’s recent vote to withdraw from the Educational Achievement Authority is a vote to save Detroit students, parents and taxpayers.

On Tuesday they voted at a special meeting to sever ties between Detroit Public Schools and the Educational Achievement Authority and to cancel a related contract with Eastern Michigan University.

The EAA, is a special statewide district composed of the lowest performing five percent of schools in Michigan. Currently it is made up of 15 schools — all from Detroit — and has about 10,000 students. The special district features an individualized computer-driven curriculum that its backers say is intended improve student achievement. Herrada, however, disagrees with its stated goal.

“It’s very, very insidious. It is basically a Jim Crow district,” she said.

“As a school system it has no public oversight, takes our new buildings that we just built with our bond money, which Detroit taxpayers and parents are still paying for, and basically leases them to these private entities, whom we do not know and who do not have to answer to us, for $1 a year.”

The EAA began as a privately-supported venture, but began receiving state funding at the start of its first school year this fall.

Herrada criticizes the EAA’s use of Teach for America instructors and its heavy focus on computers, arguing that the statewide district deprives students of time with experienced teachers.

“Basically [it’s] taking what they consider to be our highest-risk students and [giving] them the least amount of resources,” she said. “It doesn’t matter if they pass or flunk because they’re already in a failing district.”

More than one in three teachers in EAA belong to Teach for America, a non-profit organization made up of recent college graduates and professionals from various backgrounds who teach for two years in urban and rural public schools, according to the Detorit Free Press.

“All of our teachers went through the same screening process and have valid state teaching certificates,” John Covington, the EAA’s chancellor told the paper. “We wanted to ensure we had the best talent possible to educate our students.”

Backers of the new district also say the individualized computer-centered curriculum allows students to take ownership for their own learning.

Whether the EAA will be dissolved because of the Detroit School Board’s recent vote is a matter of debate. Gov. Snyder’s office has said the agreement between EMU and DPS can’t be cancelled without the approval of the EAA’s executive board. Furthermore, a spokesman for DPS Emergency Manager Roy Roberts says the board must get approval from a judge and the results of an election repealing the emergency manager law, PA 4, must be certified before they will have the authority to make such a decision.

Herrada cited what she believes are other problems. She doesn’t believe the EAA has “the institutional standing to exist,” but points out the state’s Republican legislature is currently seeking to close legal loopholes by codifying the new district into law.

Schuette maintains that they are on the board illegally because they were elected in separate districts instead of by the district as a whole. He says this is because DPS doesn’t have enough students to qualify as a First Class School District under Michigan’s Revised School Code, and hasn’t since 2008. Wayne County Circuit Court Judge John Gillis Jr. decided Wednesday to put the lawsuit, which seeks to remove the board members, on hold until Jan. 10.

Despite these challenges, Herrada said the board is committed to fighting for local control of schools.

“We know that they’re coming up with other tricks were used to it,” she said. “Rain or shine. crooks or no crooks, we have agreed that we will be in place until we are buried off.”