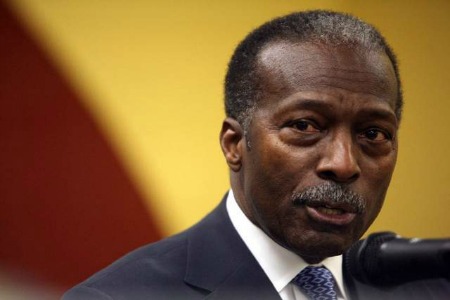 Detroit Public Schools Emergency Financial Manager Roy Roberts believes it’s still premature to talk about him stepping down as a result of last week’s election — or for the school board to be withdrawing from the EAA.

After Michigan voters repealed a law that allowed the state to appoint emergency managers to financially struggling municipalities and school districts, the Detroit Board of Education, reinstated to oversee DPS academics after Public Act 4’s suspension, voted in a special meeting Tuesday to break ties between the district and the Educational Achievement Authority.

Before the election, Roberts sent a letter to Gov. Rick Snyder saying he was considering stepping down from the position. Steve Wasko, a spokesman for Roberts, told The Huffington Post the letter ought to be taken in its complete context.

“What Mr. Roberts said in the letter to Governor Snyder prior to the election specifically is he would wait to see what the outcome of the election is and then, in fact, immediately after the election he would reach out to the Board of Education,” he said, “and based on those discussions he would make a determination and advise Governor Snyder within as soon a time as possible whether or not he could still be effective in the role.”

Roberts has reached out twice to the board to arrange a meeting since the election, according to Wasko.

In regards to the board’s recent vote to pull out of the EAA, he noted that the election results have yet to be certified and until that time the only decision of importance is Wayne County Circuit Judge Murphy’s order defining the roles of the board and the emergency manager. Under that ruling Roberts is responsible for financial decisions and the board for academics.

“The board or either side would have to go into Judge Murphy’s courtroom and seek additional orders in order to implement them,” he said.

Although Wasko noted that he was not a spokesman for the EAA, he said it was still too early in the school year to make judgements about the district’s academic success. He also affirmed Mr. Roberts’ support from the new statewide district.

“Mr. Roberts feels strongly that the EAA is solidly based on a number of reform practices and new education models that he believes are so good they’re not going to [just] be utilized by the EAA, [but] that other districts will want to use those,” he said

Wasko also noted it would be disruptive to move the EAA’s approximately 10,000 students from one district to another mid-school year, if DPS was to immediately withdraw.