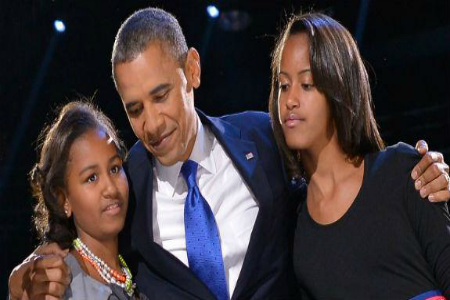 The Root’s contributing editor Demetria L. Lucas challenges the argument that President Obama was wrong to praise his daughters’ looks on election night. More black dads should do so, she writes in a piece for Essence.

… [Blogger Alice Robb] wrote, “Obama’s comments beg the question of why a girl’s beauty should be source of pride for her father — and why beauty should be a value lauded alongside strength and intelligence.”

My first thought was “Really? No … really?” But I rolled her argument around for a bit in my head to see if I could get where she is coming from, generally. Overall, there is too much importance placed on women’s looks. Anytime a women gets promoted to a position of prominence, there’s an inevitable critique of her appearance. For Surgeon General Dr. Regina M. Benjamin it was weight; for Hillary Clinton is was her clothes (pantsuits); and for First Lady Michelle Obama, it’s been the size of her backside and, of all things, the tone of her arms. Young women who are navigating changing bodies hear this and it can make them even more sensitive about their appearance, making it a bigger deal to them than it should be. And that is indeed a problem.

But it doesn’t apply here. In an effort to be politically correct (and likely feminist), Robb is going too far in the opposite direction. There is nothing wrong with any father calling his daughters beautiful — more fathers should do so, especially Black fathers, so that young women won’t go into the world seeking affirmation from strange men because they didn’t get it at home.

At the heart of this issue, one Robb may not even realize, is that Black girls turn into Black women who don’t get so many regular affirmations of their beauty in this world.