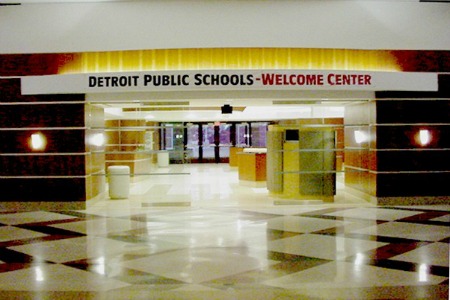 DETROIT (WWJ) – The Detroit School Board is holding a special meeting Tuesday night to unveil a major proposal on overhauling the district.

WWJ’s Vickie Thomas sat down for an exclusive interview with Detroit Board of Education President LaMar Lemmons, who shared some of the proposal’s details ahead of the meeting.

“The money is being saved in a bloated bureaucracy and bloated administration costs. We have a number of superintendent positions between the superintendent and the school principal, many of those positions will be eliminated. We have deputy superintendents, chiefs of staff, and all these people are in many cases, in most cases, are well into the six figure salary range,” he said.

Lemmons said the proposal also calls for eliminating the Education Achievement Authority, a system set up for failing schools, and putting those thousands of students back in the city’s public schools.

“We also are going to call upon the parents to drive to stop the expansion of the Education Achievement Authority and we’re going to cancel our relationship with the EAA, so that by the fall we’ll be prepared to absorb those additional kids in our buildings, which are currently being leased for $1 to the EAA system,” he said.

Lemmons said the funds saved by the proposal will be divvied up to take care of the district’s debt, with a majority going back into the classroom.

“We can save millions of dollars and direct those dollars to pay down the debt and to reduce class size, and that’s something that none of the emergency managers have done,” he said.

The School Board will meet at 6 p.m. Tuesday in the main branch of the Detroit Public Library.