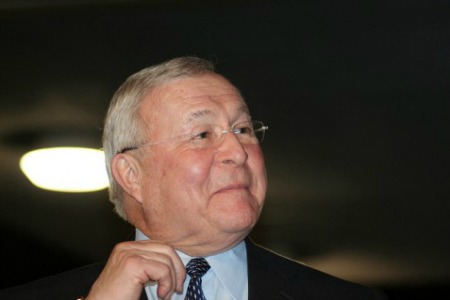 A near death experience can do that to a person — as the 73-year-old political powerhouse can attest.

Patterson was a passenger in a car heading back to his Pontiac office with his driver James Cram after a Republican candidates’ forum when their car was hit by another at an intersection on August 10.

“I feel lucky to be to be alive,” Patterson said from an easy chair in his living room during taping of “Michigan Matters.” “I had compound fractures of both wrists, an ankle, knee, femur, ribs, fractured my hip.”

He lay unconscious for 18 days. Doctors told his family he has less than a three percent chance of surviving.

His family kept vigil at his hospital bed. So, too, his work family that includes Kelly Sleva, Gerald Poisson, Phil Bertolini, Mike Zehnder and others.

He’s defied the odds and is continuing his recovery.

His daily routine today starts with hours of intense and painful rehab he knows he has to endure to get better.

Since August he’s lost about 40 pounds ,at which he can chuckle as there is some irony. In recent years, Patterson has made an annual pilgrimage to Pritikin Center in Florida to get healthy and lose a few pounds.

This year, losing weight is the last thing he need worry about.

Instead, he’s trying to keep up with a regimen of drinking three supercharged calorie infused vitamin shakes to give him nutrients and calories to also help heal his bones.

He came home from the hospital two weeks ago, telling doctors at the rehab facility that the “hospital room was simply getting smaller and smaller” and he was checking out.

Patterson, who needs a wheelchair, also has help at home for things he isn’t able to do yet like getting out of his easy chair to walk across the living room to get a book from the bookshelf.

He made an appearance at his office last week and held an emotionally charged press conference and meeting with department heads with daughter, Mary Warner, by his side.

On Tuesday night, Patterson made his first political appearance at the Oakland County GOP Victory event, arriving by wheelchair and surprising the audience when he made it on stage and was able to stand on his own.

“It took a tremendous amount to do that,” he said.

As Patterson continues his recovery, he hopes to walk with a cane in a month or two and eventually on his own.

With the holidays around the corner, Patterson’s grateful for a lot of things like being given a second chance at life.

“We had a Thanksgiving tradition in our family where we shared stories why each person was thankful,” Patterson said.

“We stopped it five years ago (after his beloved 28-year-old son, Brooksie, died in a snowmobile accident).There was an empty chair. It didn’t seem appropriate.”

“I think we’re going to start that back up this holiday,” he added