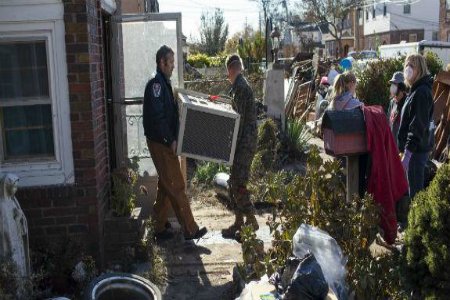 Photo Credit:Recovery efforts in Staten Island, N.Y. (Robert Nickelsberg/Getty Images)
A nor’easter that hit New York and Jersey on Wednesday threatens to slow the area’s recovery from the impact of Hurricane Sandy, wiping out power and bringing rain and 60 mph gusts of wind that could damage homes all over again.
Police are urging, but not requiring, people in New York City’s low-lying areas to leave their homes, CBS News reports.
Thousands of people in low-lying neighborhoods staggered by the superstorm just over a week ago were warned to clear out, with authorities saying rain, wet snow and 60 mph gusts in the evening could set back the cleanup, topple trees wrenched loose by Sandy, and erase some of the hard-won progress made in restoring electricity to millions of customers.
“I am waiting for the locusts and pestilence next,” New Jersey Gov. Chris Christie said. “We may take a setback in the next 24 hours.”
In New Jersey, public works crews worked to build up dunes along the shore to protect the battered shoreline, and new evacuations were ordered in a number of communities already emptied by Sandy. New shelters opened.
In New York, police went to low-lying neighborhoods with loudspeakers, encouraging residents to leave, but Mayor Michael Bloomberg didn’t order new evacuations, and many people stayed behind, some because they feared looting, others because they figured whatever happens couldn’t be any worse than what they had already gone through.
“We’ll hunker down, five people in an apartment, and make it through the night,” said Jordan Clark of Queens, CBS Station WCBS New York reported.
http://www.theroot.com/buzz/noreaster-threatens-sandy-recovery?wpisrc=root_more_news