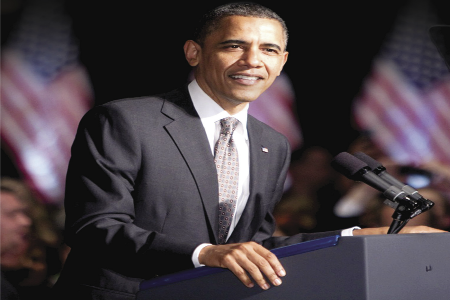 The 2012 presidential election will go down in the annals of history as the most important referendum on the American presidency where the nation’s first Black president, Barack Obama, met his critics and die-hard opposition and prevailed for a second term in office.

In essence, the message that voters sent on Nov. 6 to the whole world is that this nation, a microcosm of varying cultures and truly a melting pot, is bigger than the small loyal opposition that tried at all costs to demonize Barack Obama and attempted to make him not only a political bogeyman but also an anti-religious symbol and a racial punching bag.

The level of racial rage that manifested itself during Obama’s first term in office under the guise of concerns for his policies proved that we are a long way from being a more perfect union. The anti-American rants against Obama by notable political figures who ought to know better almost guaranteed the idea that there is a prevailing wisdom in the corridors of power in Washington that believe that America should not have a Black president.

But Tuesday night voters took another giant step for the betterment of the nation, believing in America’s power to do the unthinkable. In Obama’s own words at the 2004 Democratic National Convention delegates, “I believe that we have a righteous wind at our backs and that as we stand on the crossroads of history, we can make the right choices, and meet the challenges that face us.”

The American electorate approved a second term for Obama because they were convinced that he needed to continue to lift the nation from the economic doldrums that greeted his presidency. To put it bluntly, he inherited a mess.

The American electorate voted for Obama to return to the White House because they believe in his message of change, as when he took the rare and bold step of bringing the Affordable Health Care Law to reality, making health care coverage available to many more millions of people.

The American electorate supported Obama on Tuesday because they wanted to reject the dog whistle politics that were used to smear his administration and to take us back to the sordid past of his nation’s moral and political defect known as Jim Crow.

The American electorate came out in droves for Obama because they do not believe that women should be treated as second-class citizens in a nation that prides itself as the paragon of democracy. In picking Obama over Republican presidential nominee Gov. Mitt Romney, voters made it clear that they want women to decide for themselves how to take care of their own health and fight for equal pay in the workplace, something that Obama guaranteed with his first historic legislation, the Lilly Ledbetter Act.

The American electorate gave a thumbs up to Obama because they agreed that even though we live in a Judeo- Christian nation, we cannot impose on everyone our religious values and therefore Americans of every stripe regardless of their sex reserve the right to decide who they want to be with or marry. That no one in this country should be a prisoner because of their sexual orientation, and Obama guaranteed that with his support of gay marriage and getting rid of the Don’t Ask, Don’t Tell policy for the U.S. military.

The American electorate rebuffed the scare tactics concerning immigrants by voting for Obama because they believe in the undeniable truth that this country is in many ways truly a nation of immigrants. That those children who were innocently brought to the shores of this nation should not be treated like criminals.

One day that immigrant demonized child could rise to become a mayor or a governor. In support of this inherent and powerful immigrant story that defines the essence of America being a melting pot, Obama pushed for the DREAM ACT, and voters said a resounding yes to that by electing Obama for a second term.

The American electorate agreed with Obama’s approach to addressing the crisis of the middle class after the crash on Wall Street, and many in the middle class were rendered homeless among other economic hardships they were made to face. With the Dodd-Frank Wall Street Reform and Consumer Protection Act, Obama ensured that regulatory structure was not only put in place to prevent such a crisis from disrupting the lives of ordinary people trying to find meaning in the American Dream of homeownership, among other necessities. Obama’s win confirmed that despite what critics say about the regulatory financial reforms under Obama, voters support it because they want their assets protected and not be endangered by Wall Street.

The American electorate in granting Obama a second term approved of his leadership on the world stage and how he has helped restore America’s international reputation, his commitment to peace in the Middle East and a two state solution for Israel and Palestine. Of note is Obama’s repeated and demonstrated support for Israel’s security, his ordering of the assassination of the world’s leading terrorist, Osama bin Laden, and fulfilling his promise of ending the war in Iraq and now creating a realistic pathway to ending the war in Afghanistan.

The American electorate made President Obama their choice because the Obama Justice Department, under the the leadership of Attorney General Eric Holder, has vigorously gone after violators of the nation’s civil and voting rights laws. In so doing, the Justice Department protected the voting rights of African Americans and other people of color.

The American electorate bestowed confidence in Obama’s governance style on Tuesday because of his rescue of the American auto industry in Detroit. Against the advice of many and the willful opposition of Romney who wrote in the Wall Street Journal, “Let Detroit go bankrupt,” Obama proceeded to salvage General Motors and Chrysler, saving millions of jobs in Michigan and Ohio. Because of the resurgence of that industry and the profitability of the two iconic automakers, voters vindicated Obama in Tuesday’s victory. It verified their belief that the steps he took to save GM and Chrysler were the right ones.

Obama now has the vote of confidence of the majority of the American people and he must use that confidence to stimulate economic growth, help the middle class and make this a more prosperous nation.

Mr. President, congratulations! Now to the unfinished business of the day.

Bankole Thompson is editor of the Michigan Chronicle and the author of a six -part book series on the Obama presidency. His book “Obama and Black Loyalty,” published in 2010, follows his recent book, “Obama and Christian Loyalty” with a foreward by Bob Weiner, former White House spokesman. Thompson is a political news analyst at WDET-101.9FM (NPR affiliate) and a member of the weekly “Obama Watch” Sunday evening roundtable on WLIB-1190AM New York and simulcast in New Jersey and Connecticut.
www.michronicle.com
Andre Smith photo©