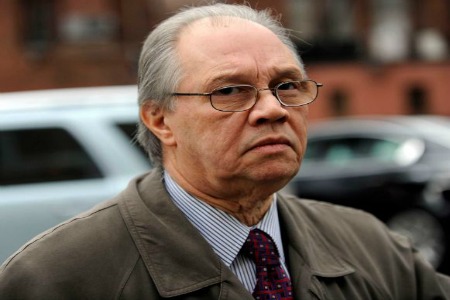 Federal prosecutors offered Mercado a plea deal that will substantially reduce his prison time to 18 months plus a $100,00 fine. Before the plea bargain, Mercado, in his sixties, could have faced up to 20 years in prison and $250,000 in fines if convicted.

Mercado’s plea came as a surprise, after Mercado’s lawyers fought to defend the former water chief’s innocence for the first six weeks of the trial.

Mercado’s lawyers said talks of a plea deal had been ongoing even after the trial started, and that the most recent offer from the Government was the best yet.

“It was the right decision at the right time,” Mercado’s lawyer Martin Crandall told reporters outside the courthouse Monday morning. “They did not make an offer like this before.”

Mercado’s lawyers tried to get their client to be tried separately from Kilpatrick and the other two defendants, but failed.

During the first six weeks of trial proceedings, Mercado’s name only started surfacing over the past two weeks when water contracts came up in testimony.

Mercado appeared in court Monday and spoke for the first time since the trial began in September. When prompted, Mercado said “yes” or “no” in a hushed voice, accepting the terms of the plea deal.

Edmunds asked Mercado if he understood that he still could get more than 18 months in prison or pay more than $100,000 in fines even after the plea deal. Mercado said yes.

However, if Mercado is sentenced to more than 18 months, there maybe a chance he could retract his guilty plea.

Plea deals that take place after a trial begins are rare but not unheard of, experts say.

Mercado is not expected to testify against his former co-defendants, as it was not a required part of the plea bargain.

However, Mercado could still choose to testify if called.

While the guilty plea came as a surprise to many, some legal experts who have been following the case say that a plea deal was never out of the question.

“He [Mercado] wanted to get out of the case,” legal analyst Todd Flood told Fox 2 Detroit reporters Monday morning.

Now that Mercado has entered a guilty plea, the case must continue in a way that will not taint the jury’s decision on the remaining three defendants. Jurors will not be told that Mercado took a plea deal and are expected to get a thorough explanation as to why Mercado’s plea does not impact the remaining defendants.

Mercado is the second defendant in what has become known as the Kilpatrick corruption case to plead guilty.

Derrick Miller, an alleged co-conspirator in the case, pleaded guilty before the trial started.

U.S. prosecutors say Kwame Kilpatrick, his father Bernard Kilpatrick and contractor Bobby Ferguson turned Detroit city call into an illegal racket for personal gain. The three are slammed with a litany of charges including bribery, extortion, tax fraud and racketeering and more than 20 years in prison.

The trial was delayed last week when Ferguson’s top lawyer Gerald Evelyn fell ill while court was in session. The trial is expected to resume on Tuesday, Nov. 13 pending Evelyn’s full recovery.