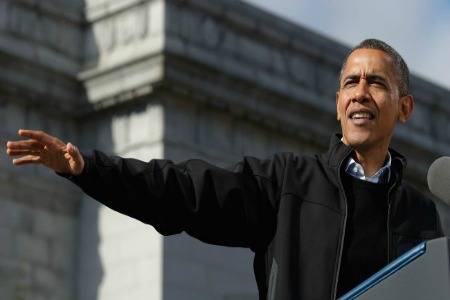 A series of major polls released on Sunday showed President Obama ahead nationally and in key states, making him the favorite to win on Tuesday.

A new NBC News/Wall Street Journal survey showed Obama at 48 percent of the vote, while Mitt Romney had 47 percent. The Pew Research Center put the president at 50 percent, while Romney had 47. The Washington Post-ABC News poll showed Obama at 49, Romney 48. Surveys released by Rasmussen and Politico showed the race tied.

All of the polls are within the margin of error, but the group of findings, in which Romney did not lead in any of the surveys, suggests a narrow Obama lead. The president also led 50 percent to 48 percent in a Columbus Dispatch poll of Ohio, the state both campaigns are aggressively contesting. The Des Moines Register showed the president ahead 47 to 42 in Iowa, a must-win state for Obama. In Florida, a must-win for Romney, one major poll put Obama ahead by two, while another showed Romney leads by six.

Currently, Obama is favored in states that compromise 237 total electoral votes, while Romney leads in states that toal 191. That includes 41 states. Of the nine that are closest, Romney leads in North Carolina, while Obama is ahead in Nevada, New Hampshire, Iowa, Ohio and Wisconsin, according to most surveys. The president would have 271 electoral votes if he carried only Iowa, Ohio and Wisconsin, giving him enough to win. Colorado, Florida and Virginia are effectively tied.

Romney is making a last-ditch effort in Pennsylvania, but is behind in most polls there.