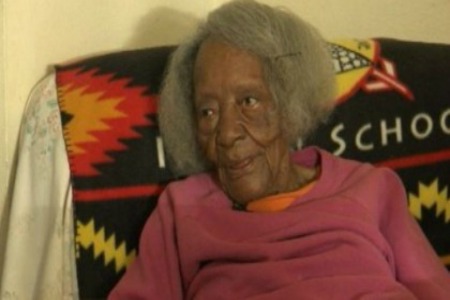 FORT MYERS, FLORIDA – Long lines at polling places have been a familiar sight this week, but two hours in line is nothing compared to how long one Fort Myers, Florida woman chose to wait.

For the first time in her 99 years of life, Rosie Lewis cast a ballot.

“She’s an amazing person. 99-years-old and still has her right mind,” said her grandson Nelson Lewis.

In her modest Fort Myers home, she sat in her favorite chair close to the Bible and with her ballot in hand.

“I just trust in the Lord to let me go on,” Lewis remarked.

Her life has spanned 24 presidential elections. Yet, this is the first time she’s voted in one.

“She completely understands what she just did,” said her grandson. “My grandmother never forgets anything.”

“I said, ‘Honey, when and where because I will be there,’” said Ware.

Lewis credits the election of Barack Obama for inspiring her to vote.

“I said I’m going to vote if the Lord spares my life this time,” said Lewis. “I made it up to my mind to vote.”

She was 7-years-old when the 19th Amendment passed, which gave women the right to vote.

Lewis was in her 50s by the time Jim Crow laws were abolished. Her grandson said that helps explain why she waited this long to vote.

“She was already set in her ways, and wasn’t really thinking about politics,” he said.

Now she’s one year away from the century mark and not secretive about the candidate she supports.

“Ms. Rosie should be an inspiration to all of our young people and old people,” Ware said. “You never get too old to exercise your right.”