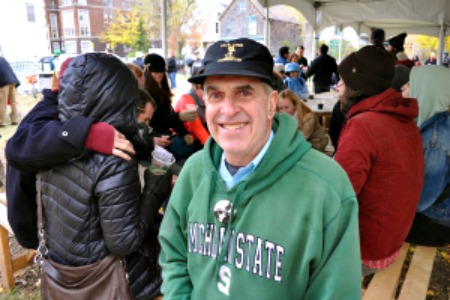 (Photo: Amelia Kanan) Stewart McMillin, who is pretty well known around these parts. He’s been guiding tours and leading pub crawls with history attached through the neighborhoods, cemeteries, churches and streets of Detroit for over 40 years.)

My life here in the D has picked up quite a bit and while learning how to balance the new workload, “Scene In Detroit” has unfortunately taken a hit. However, on Sunday I had one of those experiences that reminded me what the meaning of “Scene” is all about and I’ve been so eager to share it with you!

Tashmoo Biergarten’s last event for the season was Sunday and since I’ve been swamped, I wasn’t able to make it until then. Of course, I waited until the weather turned brisk to sit outside and drink cold beer. Surprisingly though, the weather didn’t spoil the corn hole game, the number of people who came out or how quickly the brew went down.

The chill actually enhanced the enjoyment. As I sat, snuggled between strangers around a fire pit, sipping my Kolsch (Full Circle by New Holland Brewing), surrounded by the beauty of historic Indian Village, I couldn’t help but smile. Thankfully no one asked, “Who are you and why are you smiling?” but if someone had, I would have gladly told them “My name is Amelia and I feel so lucky to be a part of such an incredible community, during such an exciting time and one of the most interesting places in the world.”

Actually, on second thought, I probably would’ve been embarrassed, shrugged and walked away, hoping to never see them again. Again, thankfully, no one asked.

As I creepily smiled to myself, a nice older man tapped me on the shoulder and handed me a sheet of paper. I took it, feeling bad for him because I idiotically assumed he needed something from me.

His hat said “Conductor” and his eyes seemed kind, so naturally, I listened and asked if I could take his picture.

The man in the conductor hat was Stewart McMillin, who is pretty well known around these parts. He’s been guiding tours and leading pub crawls with history attached through the neighborhoods, cemeteries, churches and streets of Detroit for over 40 years.

Since this lover of history is such a great story teller, his stories of the Underground Railroad, Native Americans, French, British fleeing to Canada and the history behind street signs are enticing. He’s the man who you wished you had for a history teacher, way back when.

In fact, McMillin was a successful educator for most of his life, he’s also an avid traveler having visited more than 141 countries, including every country in Europe (except Iceland), 17 African countries, every province of Canada and each U.S. state.

McMillin’s excitement and love for the city strips his years of age off his record. No one would know he is over 70 unless he told you or you read it somewhere.

After we talked a bit about our shared fascination over the history of our city, the connections and similarities of its history to what’s going in present time and how excited we were about the future … We hugged.

“Sure! Where should I pose?” Before I could answer, he suggested near a Brewery sign. It was a solid choice and the only reason I didn’t choose that image is because it didn’t reflect the genuine glimmer in his eyes.

I strongly encourage you, especially you who do not live in the city, to sign up for a tour. Take a day to ride along in a comfortable charter bus, eat and drink well, and learn something. Check out McMillin’s website for details. Here’s a list of upcoming scheduled tours in the near future: