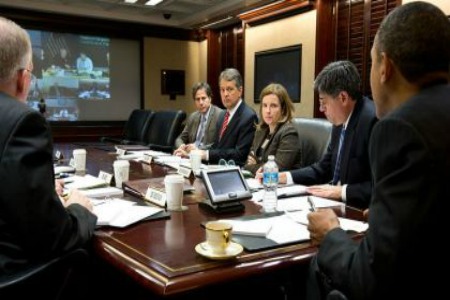 Whatever the outcome of the presidential election, it is clear that Hurricane Sandy has created both an unusual pause in the campaign (though not completely — Mitt Romney continues to campaign in Iowa, holding a rally on Tuesday) and an opportunity for President Barack Obama.

Why? Because election or no election, the nation only has one commander in chief, and in a time of crisis, the country’s single national leader takes center stage.

“The great thing about America is when we go through tough times like this, we all pull together,” Obama said Monday afternoon as the television cameras rolled. “We look out for our friends. We look out for our neighbors. And we set aside whatever issues we may have otherwise to make sure that we respond appropriately and with swiftness.”

The president was not campaigning—indeed, he had canceled an appearance in Orlando that morning and flown back to a nearly deserted capital—but in a way, he was.

He was auditioning for another four years as commander in chief by demonstrating that he had taken charge of the federal response and displaying compassion toward the victims of Hurricane Sandy.

That’s his job, of course. But he now has the chance to perform it under the unique spotlight of a national disaster that, fairly or unfairly, has left Mitt Romney with little running room in the final week of an extremely tight presidential campaign.

And even on MSNBC’s Morning Joe, where host Joe Scarborough has expressed near-certainty that Romney will win the election, the storm’s impact was seen by the panel as a net-plus for the president:

“The president’s going to have the opportunity to go to Virginia not as a politician but as a president,” said Scarborough during an appearance on The Today Show on Monday. “Somebody there to help out. Somebody there to comfort people. You know, the two Bushes — Bush 41 and Bush 43, had disasters in their handling of hurricanes. George H.W. Bush with Andrew, which damaged his political career, was damaged there. And of course George W. Bush in 2005 with Katrina. Many people in the Bush White House say that was the low point of his presidency. A lot of dangers, also a lot of political opportunities.”

The hurricane also gives Obama that rare moment of bipartisanship that independents and more importantly, the media, have accused him of failing to deliver over the past four years (Republican opposition and obstruction aside.)

For example, Chris Christie, the Republican governor of New Jersey — and a top Romney surrogate — has heaped praise on the president for his personal touch, communication and leadership as the storm bore down on the Garden State. That’s not ideal surrogate behavior, as New York magazine points out, but it could resonate with people who are tired of the crass partisanship in American politics today.