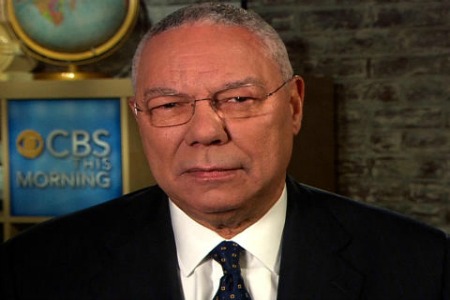 The Republican said he believes the economy is “starting to pick up” and attributed the recovery to the president’s polices, citing specifically the auto industry bailout and Obama’s economic proposals. “Generally we’ve come out of the dive and we’re starting to gain altitude,” he said.

Powell added he was “uncomfortable” with Mitt Romney’s tax plans and views on foreign policy. Pointing to Monday night’s final presidential debate, Powell argued the GOP nominee had changed his positions on the wars in Afghanistan and Iraq. The former secretary of state said he was concerned with the advice Romney was getting from campaign staff members.

“I think there are some very, very strong neo-conservative views that are presented by the governor that I have some trouble with,” Powell said, though he did not elaborate on which views.

“I also saw the president get us out of one war, start to get us out of a second war and did not get us into any new wars,” he said.

Powell added he was pleased with the Obama administration’s views on climate change, health care, immigration and education. As for the rising federal debt, he faulted Congress for failing to reach a “grand bargain” on a deficit-reduction plan.

“This is work the Congress is supposed to be doing,” he said. “Why can’t they up on the Hill start talking to one another, reach across the aisle? But it will take great presidential leadership.”

Asked if he was still a Republican, Powell said he still claimed the GOP as his political home. “Yes I think I’m a Republican of a more moderate mold, and that’s something of a dying breed, I’m sorry to say.”