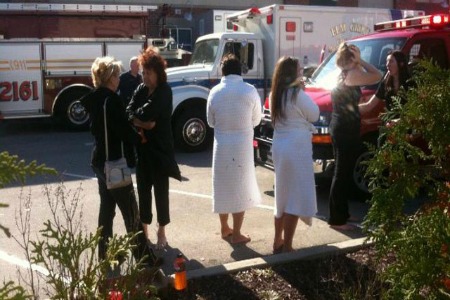 (CNN) — Murder-suicides, by their very nature, leave a mountain of unanswered questions. When the killer pulls the trigger first on his victim and then himself, he takes with him to the grave the reasons that compelled the angry, desperate act.
Not so in the case of Radcliffe Haughton.

What prompted the 45-year-old former Marine to open fire at a suburban Milwaukee salon Sunday — killing his wife and two other women, and wounding four others — was foreshadowed in no uncertain terms by his estranged wife just three days earlier.

At a restraining order hearing Thursday, the wife, Zina, begged the court for protection, saying her husband would surely kill her.
With her voice shaking, she outlined how he’d threatened to throw acid in her face. How he accused her of cheating on him. How his red hot jealousy terrorized her “every waking moment.”

“Things have gotten so bad. We need to separate,” she said at the hearing, according to a recording obtained by CNN affiliate WISN. “We need a divorce before you hurt me. I don’t want to die.”

The judge sided with her. Haughton was ordered to stay away from his wife for the next four years. He was forbidden from possessing a gun.
But on Saturday, he bought a .40-caliber handgun from a private seller. Wisconsin law only requires background checks for purchases from a dealer.

The next day he took her life.

At the bizarre Thursday hearing, Haughton acted as his own attorney — cross-examining his wife, asking questions that the judge refused to allow.
Haughton said his wife’s infidelity was to blame for their failing marriage.

“I have been involved with Zina Haughton for most of my adult life. This is the woman that I love,” he said.

“Things have not always been the best that they could have been but I can stand before the court, stand before God and say that I love her. I love her unconditionally. This situation was brought about by infidelity.”

The wife said the abuse began long before the infidelity accusations.
She detailed a night when she said Haughton pulled a gun on her. It accidentally discharged. The bullet narrowly missed her and her daughter.

“For 20 years, we’ve fought. He’s hit me. We’ve fought. But since May 29, the evening that he thinks I cheated on him, just the threats have gotten so bad, and like I said, I don’t want to die,” she said.

A long history with police

Police in the area say they had a long history of run-ins with Haughton, a general manager of a local Land Rover dealership.

The police reports seemed to speak of a man who was destined to harm his wife.
In January 2011, Haughton was accused of throwing his wife’s clothes out of their home during an argument and then pouring tomato juice on her car.
When police arrived, Haughton locked himself in the home and officers thought they saw Haughton holding a “long barreled” gun in the direction of his wife, according to a police report. Charges were eventually dropped in that case.

On October 4 this year, police say, Haughton slashed his wife’s tires outside the salon.

After that incident, the wife applied for the restraining order.

“He threatened to throw acid in my face, burn me and my family with gas. His threats terrorize my every waking moment,” she said in the request obtained by the Milwaukee Journal Sentinel.

Calm in the face of death

On Saturday, Haughton walked into the two-story Azana Spa in Brookfield, outside Milwaukee, where his wife was a stylist. He was screaming.

“He yelled ‘Everybody!’ Get down. Get down,'” Betty Brunner, a customer in the salon, told WISN.

“And as I went to get down, Zina walked to the reception desk, and said, ‘Calm down, sir. There are good people here.”

Haughton grabbed his wife and pushed her behind a wall, Brunner said.

Then the bullets flew.

Brunner considers Haughton’s wife a hero for confronting her husband and making sure to move him away from most of the customers.

She says she wonders how Zina Haughton stayed so calm in the face of death.

If the court hearing is any indication, perhaps she knew it was just a matter of time.