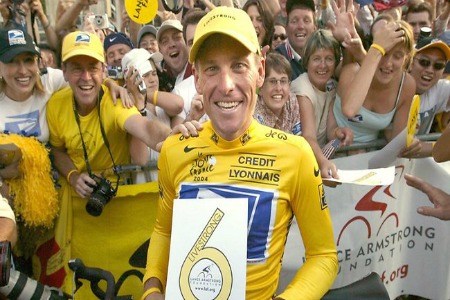 CNN) — Lance Armstrong is losing the seven cycling titles that made him a legend.

The International Cycling Union announced Monday that Armstrong is being stripped of his Tour de France titles.

“Lance Armstrong has no place in cycling,” said the union’s president, Pat McQuaid.

The decision follows this month’s finding by the U.S. Anti-Doping Agency that there is “overwhelming” evidence that

Armstrong was involved as a professional cyclist in “the most sophisticated, professionalized and successful doping program.”

Armstrong’s story — that of a cancer survivor who tamed the grueling three-week race more than any other cyclist before or since — had made him a household name. But allegations of doping long dogged his career.

Then came this month’s finding by the USADA.

The agency announced it would ban Armstrong from the sport for life and strip him of his results dating from 1998.

The decision wiped out 14 years of his career.

The International Olympic Committee also is reviewing the evidence and could revoke Armstrong’s bronze medal from the 2000 Sydney Games.

It is now up to the organizers of the Tour de France whether it will nominate alternate winners for the 1999-2005 tours. The Amaury Sport Organisation, which runs the 21-day event, has said it will decide after the ruling.

Armstrong, 41, has consistently denied the allegations.

In the past, Armstrong argued that he has taken more than 500 drug tests and never failed. In its 202-page report, the USADA said it had tested Armstrong less than 60 times and the International Cycling Union conducted about 215 tests.

“Thus the number of actual controls on Mr. Armstrong over the years appears to have been considerably fewer than the number claimed by Armstrong and his lawyers,” the USADA said.

The agency didn’t say that Armstrong ever failed one of those tests, but his former teammates testified as to how they beat tests or avoided the test administrators altogether. Several riders also said team officials seemed to know when random drug tests were coming, the report said.

Speaking to participants in his cancer-fighting foundation’s annual Ride for the Roses in Austin, Texas, on Sunday, Armstrong said, “People ask me a lot how are you doing. And I tell them I’ve been better, but I’ve also been worse.”

In his brief remarks to the crowd, Armstrong didn’t mention the recent findings by the USADA.

He stepped down last week as chairman of the Lance Armstrong Foundation, but said he will continue to be involved.

Some of the foundation’s donors are furious over the scandal, and want their money back.

“We will not be deterred,” Armstrong said Friday night at the organization’s 15th anniversary celebration in Austin, Texas. “We will move forward.”

The controversy also has taken its toll on Armstrong’s endorsement deals.

On the same day he stepped away from the leadership of his foundation, Nike, which initially stood by Armstrong, dropped him with a terse statement citing what it called “seemingly insurmountable evidence” that he participated in doping.

Hours later, brewery giant Anheuser-Busch followed suit, saying it would let Armstrong’s contract expire at the end of the year. Nike and Anheuser-Busch said they still planned to support Livestrong and its initiatives.

Professional cycling couldn’t escape the backlash either as Dutch bank Rabobank announced it is to end its sponsorship of pro cycling teams in the wake of the doping scandal.