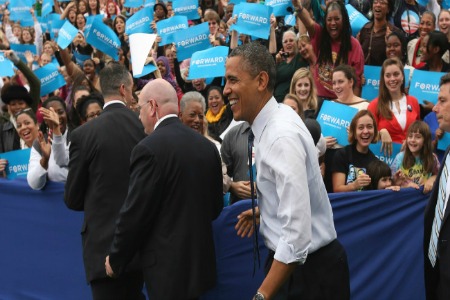 Following President Obama’s strong performance in Tuesday’s debate, Republicans, including Mitt Romney, have seized on a new line of attack: the president isn’t being specific enough about his second term agenda. Non-partisan analysts are making the same claim, namely that Obama must provide more details about what he would do in his next four years to win.

They’re wrong. Even though he’s not talking about these ideas much on the campaign trail, it’s likely Obama would push for immigration and energy reform and a long-term budget deficit reduction deal in a second term. But perhaps the most important goal of an Obama second term, one he has nodded at himself at times, is preserving the accomplishments of his first term.

The health care law and the Dodd-Frank regulatory reform bill were huge, sweeping measures that could transform entire sectors of the American economy. One could argue the health care law will have more impact than any single piece of legislation passed by either Bill Clinton or George W. Bush over the course of their combined 16 years in office, other than the authorizations for wars in Iraq and Afghanistan. Conservatives agree that the legislation is powerful, which is why they are trying so badly to repeal it.

And the vast majority of the health care law has not been implemented. One could say Obama has a limited second term agenda, or that he is trying to finish carrying out his plan to give almost one in 10 Americans health insurance (an estimated 30 million will become newly insured under Obamacare) and transform the entire system of Medicare, a program on which 48 million Americans receive insurance and the government spends one of every six of its dollars.

Romney has pledged to repeal Dodd-Frank and the health care law. These are not idle claims. Fifty Republican senators could join a President Romney and the GOP-backed House and eliminate most of the healthcare law through a complicated process in the Senate called reconciliation. (Paul Ryan, as vice president, would cast the 51st vote in the Senate.) Instead of the federal government effectively giving states money to insure their citizens under Medicaid, as Obama would do, Romney would likely reduce funding for Medicaid and leave coverage decisions up to individual states.

So Obama’s campaign has made a logical strategic decision. It has not laid out detailed plans for how the president would reform immigration or energy or the federal budget. This is regrettable in a number of ways. It has denied voters the ability to learn exactly what Obama would do in a second term. It denies the president to claim any kind of mandate on these issues.

Journalists like me enjoy big debates about critical issues in a campaign. But in reality, proposing to raise the retirement age or a broader climate change bill would have been politically perilous. If Obama lost the election on those issues, he would not just lose the ability to reform America’s energy system and retirement programs, but also the health care law and regulatory reform agenda he spent his first two years on.

There is still a path for Obama to accomplish what we assume are his goals for a second term, even if he is not talking about them now. One view of politics is that candidates campaign on their ideas, get voters to support them and then implement them in office. You could argue President Bush proposals to reform Social Security failed in 2005, in part, because he said little about them during his 2004 campaign. I would make a different case: Bush’s proposals on Social Security failed because they were (and remain) unpopular.

A host of factors determine what can pass and what can’t. President Clinton’s 1996 campaign is best known for his touting of small-bore issues like school uniforms, but the next year he created a much more important program called SCHIP that provides health insurance to low-income children. Bush didn’t campaign on it much, but pumped billions of dollars into helping stop the spread of HIV/AIDS in Africa. Obama didn’t campaign on bailing out America’s auto industry, but did so once in office.

Obama could have laid out a series of new detailed proposals over the last several months for his second term in office. But in reality, he already has a big agenda that we know about (Obamacare and Dodd-Frank) and talking about the other ideas will have little influence on getting them passed.