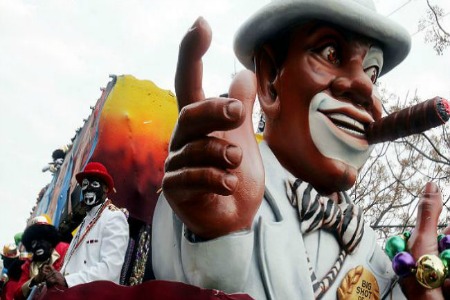 It’s 2012. Why are we still talking about blackface? It’s true there has never been an official ban on blackface put forth by our national government, but as Americans we’ve pretty much agreed that when white people smear their face with black make-up and paint their lips a cherry red in imitation of black people, it’s offensive. In fact, since the 1960s, blackface has officially been placed on the list of taboo topics most people know to avoid like the plague. Of course, not everyone read the memo. Like Ted Danson in that infamous Friars Club fiasco back in 1993 or the boys in upstate New York last week — yes last week — who though donning blackface would make for a funny skit at their high school while a re-enacting the Chris Brown-Rihanna domestic violence incident.

And then of course, there’s the rest of the world. Outside of the United States, blackface and sambo imagery is still all the rage.

From Mexico to South Africa, in Sweden and in Germany, it is not uncommon to find what we in the United States would consider racist images of black people being used on product labels and in advertising for everything from popsicles to chocolate candies. And then there are the countries where donning blackface is actually a regular part of the cultural experience.

In the Netherlands, for example, blackface is on fervent display during one special time of year — Christmas. And that’s not just Christmas day, but rather the entire Christmas season, which runs from late November through December 6. During that time, Sinterklaas, Santa’s skinnier and more religious cousin, comes to town with his sidekick Zwarte Piet, aka, Black Peter. Some say Black Peter is black only because he slides down the chimney and gets full of ashes, but others claim he is Sinterklaas‘s Spanish/Moorish/African slave.

Regardless of Piet’s true ethnic origins, blackface is used when White Dutch people want to portray him in the countless Christmas pageants and parades during the holiday season. And the black faces are augmented with bright red lipstick and matted Afro wigs. For all intents and purposes, these modern-day Black Peters look like they came straight out of a Southern minstrel act circa 1848.

Dana Saxon, a black American graduate student at the University of Amsterdam who specializes in Ethnic studies, was horrified the first time she saw Zwarte Piet on display and is adamant in her belief that the practice is racist and hurtful. “This is an issue for anyone who is able and willing to see the tradition as a remnant of a Dutch past of colonialism and slavery,” Saxon told theGrio. Even though many Dutch citizens want to cling to the tradition and ignore the cries of racism, Saxon is seeing progress. “In addition to a number of writers and social activists that have raised resistance for years, an artist campaign promoting ‘Zwarte Piet is Racisme’ gained a lot of momentum in 2011,” Saxon pointed out. “They currently have a popular Tumblr page and almost 2,000 followers on Facebook.”

The Netherlands isn’t the only country where blackface is part of the Christmas tradition. Spain can claim that custom as well. But the Spanish use of blackface has nothing to do with Santa. Their reasons are biblical. While Santa Claus has become a more recent addition to the Christmas season in Spain, traditionally the three Wise Men or the Three Kings gave out gifts on January 6. These are the same three guys who brought gifts to the baby Jesus upon his birth. That makes sense. What doesn’t make as much sense is why white Spaniards feel the need to paint their faces black in order to ‘realistically’ portray Balthazar in parades and in church festivals. Besides the fact that the Bible never explicitly mentions what race Balthazar was, one can only wonder why it seems so necessary to paint one’s face black at all. Could it possibly be that Spaniards just enjoy blackface and this opportunity to employ it?

This might be a paranoid assumption, but for the fact that in Spain blackface is still a popular tradition during the raucous carnaval celebrations held in the spring. “Being black” is a super-easy costume to create for Halloween; plus, blackface is the perfect way to mock black athletes competing in Spain as well. Yet, Professor Jaime Durán, a native Spaniard and professor of Spanish language and culture at Temple University, tells theGrio that there is no malice behind this culture’s love of “playing” black.

“There is no offense implied,” Durán insisted. “Most people in Spain still do not see anything wrong in painting one’s face black, or sense it as racial or racist.”

However, given that Spain’s formerly homogenous population is now 10 percent of color due to immigration, it is slowly beginning to seep in that blackface isn’t a benign and innocent practice. “For the last decade there were fewer and fewer painted Balthazars in Kings Day parades, and more and more genuinely black African folks [playing the parts],” Durán said. He sees this as a sign of evolution. “By being exposed to new realities, Spaniards are slowly but steadily learning how to deal with [a more diverse society].”

Japan is another country where the lack of diversity in the population means the use of blackface is hardly challenged. In this nation, blackface and black sambo images are a part of every day life. You don’t even need a holiday. On television shows, YouTube videos and even on the streets, Japanese people have been known to both celebrate and mock African-Americans by using blackface.

But, says, Dr. Fabienne Darling-Wolf, a professor at Temple University with a specialty in Japanese popular culture, Japanese people also don white make-up and wear tape on their eyelids to make fun of white people. So are the Japanese equal-opportunity racists?

“It’s complicated,” Darling-Wolf told theGrio. “It is an accepted practice in Japan for Japanese celebrities or models to take on the identity of a black person, just like it is an accepted practice for them to take on any racial or ethnic identity.” But as it relates to the usage of derogatory images of black people either with blackface or sambo figures, once again it’s hard to point a finger — especially when America itself may be the source of the international community’s prejudiced ideas about African-Americans.

So, what does this mean for black Americans? Should we be up in arms over the fact that an offensive practice we fought hard to abolish is still acceptable, and dare we say popular, in other parts of the world? Or refuse to visit countries where blackface still reigns supreme? Is it even fair to view blackface through the lens of political correctness in countries where black people make up only a small fraction of the population?

Perhaps if black people traveled more internationally, people in other countries would be transformed by the recognition that real black faces are gateways to living, breathing individuals unlike their painted versions.