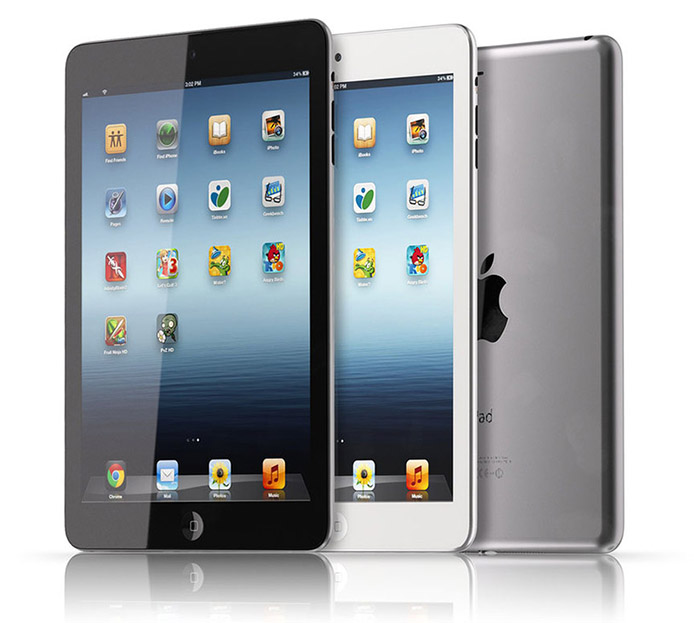 Just as expected, Apple held its cards till the very end – a smaller less expensive iPad is in production. Though there hasn’t been an official announcement from the company, the Wall Street Journal recently confirmed that an Asian supplier for Apple has started production on the rumored tablet.
This comes on the heels of Amazon’s newly released Kindle Fire HD models and Barnes & Noble’s new Nook HD (which will be available on Nov. 13).
According to the Wall Street Journal’s report, the tablet will have a 7.85-inch liquid-crystal display with a lower resolution than the current models. To compare it: the Nook HD will have a 7.65-inch screen and the Kindle Fire HD is listed as 7.6 inches. Those numbers alone makes it debatable whether there’s anything “resolutionary” – to borrow an Apple phrase – about these tablets; that is, if you simply rely on physical stats alone. Expect Apple to draw the distinction very quickly. Look at the Galaxy Tab. It’s probably the best Android-based tablet on the market, but Apple still has more apps, more in way of design, and a cool/snob factor that all of these other products just can’t equal.
Recent reports have also suggested that laptops are starting to take a backseat to the convenience (and portability) of tablet devices. Although some tasks are still better suited for a laptop or desktop computer, Apple and its competitors are pushing hard to narrow that line by making tablets more hybrid-like than they actually are.
Here’s what we’re hoping for when the so-called iPad mini drops an Apple-sized bomb on the market:
1) Comparable pricing – if the mini’s not starting at $199, it should not exceed $249 for an entry-level model. Given the sheer dependability of the Apple brand, some consumers might be willing to pay slightly more for the iPad mini than other $199 tablets. Hopefully, the lower price and smaller processor won’t mean a loss of the iPad’s greatest asset – its ecosystem.
2) Full use of Apple’s ecosystem – Sorry, Amazon and Barnes & Noble, but you’re selling devices as “tablets” that don’t really operate fully on Google’s Android OS. You can get a few choice apps here and there, read some magazines, and tons of books, but the ability to use these tablets as anything other than consumption devices is frankly, limited. If you want to make presentations, do schoolwork, and other productivity tasks, a full-sized tablet’s going to be a better choice. The iPad mini should step in to fill this gap.
3) Beautiful design – Yes, it’s true, what’s on the inside usually outweighs physical attributes alone, but Apple has always walked the line between form and function. Also, it shouldn’t just be a miniaturized version of its cousins, the new iPad and the iPad 2. The iPad mini needs to have a separate physical identity, if you will.
4) Reset the standard/Remake the future – Since Apple unveiled the original iPad in 2010, a high standard was established for what a tablet could be. Then came the iPad 2, and earlier this year, the new iPad gave us “retina display.” The iPad mini should not only reset the standard of what a 7-inch tablet should be, it should indeed reset the current course, and point the way to a new mobile technology.