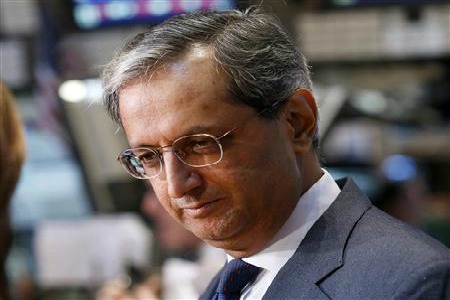 A statement on Tuesday from Chairman Michael O’Neill said Michael Corbat, previously chief executive for Europe, Middle East and Africa, would succeed Pandit as CEO and as a board member.

Pandit’s departure sent Citigroup’s stock down nearly 2.5 percent in premarket trading as investors tried to figure out why he would leave now after keeping the bank afloat during the financial crisis and getting it back on a firmer footing.

“I would have expected he wanted to stay around and see some of the fruits of his labors there,” said Peter Jankovskis, co-chief investment officer of Oakbrook Investments LLC in Lisle, Illinois.

Pandit’s resignation comes after a series of high-profile defeats this year. In March the Federal Reserve rejected the bank’s capital plans after a stress test; Pandit had led analysts and investors to believe the dividend-raising plans would be approved.

Last month, Pandit agreed to a low sale price for his bank’s stake in the brokerage operated by Morgan Stanley. Citigroup had to take a $4.7 billion charge in the third quarter to write down the value of that stake.

Citigroup shares fell 90 cents to $35.76 in premarket trading. The stock rose sharply on Monday after the bank reported third-quarter results that were much better than analysts expected.

“What Pandit and Havens did was increase the uncertainty around Citi,” said Matt McCormick, banking analyst and portfolio manager at Bahl & Gaynor in Cincinnati, Ohio. “There’s a perpetual cloud of uncertainty surrounding Citigroup. There’s always turmoil … that’s had to affect the stock price.”