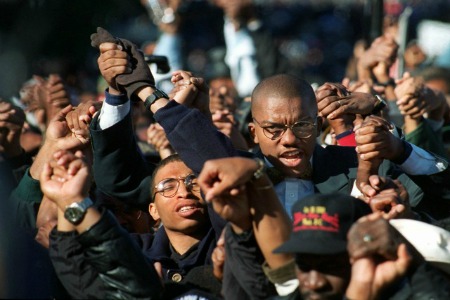 The Million Man March (pictured), one of the most moving and emotional moments ever in African-American history, took place on the grounds of the National Mall on this day in 1995. The symbolic importance and cultural impact of the huge gathering signified a shift in the attention on issues that plagued urban environs and minorities. The National African American Leadership Summit and the Nation of Islam worked in tandem alongside local chapters of the NAACP to make the March a reality.

At the time, African-American leaders were moved to act, when in 1994, the Republican Party gained control of Congress during President Bill Clinton’s first term in office. Feeling in some way that policy matters focused on the concerns of Blacks, the leaders of the time sought to be heard and become part of the national agenda. Much like today, unemployment and poverty disproportionately affected Blacks in comparison to poor Whites, sparking Rev. Jesse Jackson to address several concerns in front of the House of Representatives.

The rate of arrests of Black men, drug use among African Americans, environmental hazards, and other societal ills were all on the table and the organizers of the March boldly declared war against the negative downturn. In addition, racial tensions in the country were high, with the highly publicized O.J. Simpson not-guilty verdict coming just two weeks before.

Consequently, Dr. Benjamin Chavis Muhammad, the national director of the March, used his background as champion for African-American rights to connect groups with one another for the March. The Million Man March was a call for men of their respective communities to gather together and shift the tide for African Americans of either gender.

Men and leaders of all faiths and political ideologies saw the importance of banding together for the March. Further, Nation of Islam leader Louis Farrakhan called October 16 “a day of atonement.”
The March began at 6 a.m., with busloads of attendees (pictured above) coming from all over the country and even around the world. Community leaders, pastors, elected officials, and other public figures made up a long list of speakers who spoke powerful words to the reported 1.5-million persons who were there.
Watch footage of the Million Man March here starting at 4:29:

Maya Angelou, Rev. Jeremiah Wright, Rev. Jesse Jackson, Rosa Parks, and Martin Luther King III were among the more notable speakers of the day. Min. Farrakhan delivered the blistering closing speech, challenging the men in the crowd to embrace and honor one another. In one particularly moving moment, men from all walks of life who didn’t know one another were tearfully hugging, vowing to support the other.

Seventeen years later, the aims of the March are still relevant, especially since the jobless rate and health disparities for Black people are still hot issues. No matter which side of the aisle a person stood on, and regardless of one’s spiritual calling, the Million Man March left a necessary mark in the minds of many, and hopefully, another showing of solidarity of that sort will occur in the near future.