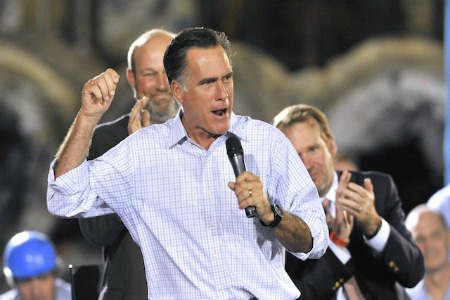 After some very confusing statements about abortion over the past two days, the Republican presidential hopeful Mitt Romney has some explaining to do to American women.

Yesterday, Romney told the Des Moines Register that “There’s no legislation with regards to abortion that I’m familiar with that would become part of my agenda.” Immediately afterwards, likely in order to calm criticism from his right wing base, his campaign spokeswoman Andrea Saul told the conservative National Review online: “Mitt Romney is proudly pro-life, and he will be a pro-life president.”

But Team Romney didn’t stop there. Even after the statement to the National Review, Saul seemed to shift Romney’s position on abortion yet again, this time to the AP saying: “Gov. Romney would of course support legislation aimed at providing greater protections for life.”

Romney’s epic abortion flip flops are nothing new. In 1994, when he was running for the U.S. Senate against Ted Kennedy, Romney was pro-choice. In 2002, when he was running for governor of Massachusetts, he was so emphatically pro-choice, he disavowed the endorsement of a prominent pro-life organization in his then home state. By 2005, Romney had suddenly become pro-life, but allowed for exceptions in cases of rape and incest. And now that the Republican party platform includes a complete abortion ban with no exceptions and personhood language, Romney opposes abortion in the strongest terms possible (except when he’s trying to win over undecided women voters.)

This latest shift on abortion is different from the rest. This isn’t a flip flop. Obama’s Deputy Campaign manager Stephanie Cutter said on a call with reporters on Wednesday: “We now know that the real Mitt Romney will say anything to win. With just 27 days left before the election, he’s cynically and dishonestly hiding his real positions, but voters shouldn’t be fooled and won’t be fooled…He’s trying to hide his real position, but there’s no hiding when you are President. And on this issue and so many others, women simply cannot trust Mitt Romney.”

And why should women trust that the position Romney articulated yesterday on abortion will be his final answer? The issues facing women are just too important and Mitt Romney can’t seem to keep his story straight.

On the same call Cecile Richards, president of Planned Parenthood, who is taking time out to volunteer with the Obama campaign, said, “I don’t think this is about flip-flopping. I think this is about completely trying to distance himself from the positions he has taken repeatedly. Obviously he took these positions as he was running for the Republican primary. I mean, his three main positions when it comes to women’s health are: he wants to get rid of women’s access to birth control through insurance plans, he wants to get rid of Planned Parenthood, and he wants to overturn Roe. I think it’s completely disingenuous to say this is not part of his agenda.”

By Wednesday afternoon, Mitt Romney was back to vowing to be “a pro-life president,” saying in Ohio: “I think I’ve said time and again that I’m a pro-life candidate and I’ll be a pro-life president.” Romney added: “the actions I’ll take immediately [are] to remove funding for Planned Parenthood. It will not be part of my budget. And also I’ve indicated that I will reverse the Mexico City position of the president. I will reinstate the Mexico City policy which keeps us from using foreign aid for abortions overseas.”

Removing funding from Planned Parenthood has serious consequences. Richards notes that “[t]he reason why Planned Parenthood is still being able to provide cancer screenings and birth control to women in America is because President Obama has stood up to the Tea Party Congress, and said we are simply not going to get rid of that. And so I do think that he’s trying to have it both ways, by saying that’s it’s not part of his agenda, but giving complete license to the most extreme part of his party when it comes to repealing access to healthcare that women have had for decades.”

Abortion, contraception, and health care are economic issues for women — disproportionately so for women of color, who are more likely to be uninsured. Mitt Romney cannot speak out of both sides of his mouth three weeks before Election Day to try to sound like he won’t take women back to the pre-Roe v Wade world of back alley abortions. A Romney administration also would mean women living in a pre-Obamacare world where breast cancer is a pre-existing condition.

Voters cannot trust a man running for president who articulates all sides of every issue impacting women. These issues are too important to let him do his best slick salesman impression to destroy decades of progress for the lives, safety, status, and health of American women.