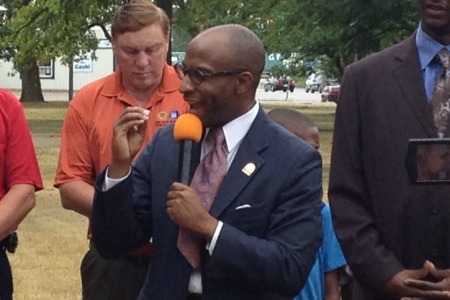 Detroit, Mich. has always been a key political and cultural center in America. It has been the Fertile Crescent for the automotive industry, the Motown sound and black self–empowerment movements. Detroit put the world on wheels and provided the sound track for the ride. Elijah Muhammad started his movement in Detroit. Dr. Martin Luther King Jr., gave his most remembered speech and led his largest march here in Detroit. However, recently it seems Detroit and its legacy are in jeopardy. The automotive industry had to be bailed out in order to stop an impending collapse. Similarly, the movement for African American and minority self-empowerment is on life support in Detroit.

Polls are interesting instruments. On Tuesday, Oct. 9, 2012, the Detroit News reported findings from its own survey funded by the Thompson Foundation. The survey claims that Detroit’s crime crisis and citizens lack of faith in the city’s current leadership will potentially cause 40 percent of residents plan to move within five years. Once again Detroit mirrors the nation, as many in America have lost faith in the country’s current leadership and are calling for new leadership. Is this local and national call for new leadership a referendum on African American political leadership? Is the claim that American politics and culture have transcended race a myth?

As the nation moves closer to a pivotal moment of presidential decision Detroit prepares to make its own history. America will soon decide if it can transcend race and potentially re-elect the first African-American president of the United States Barack Obama. Detroit prepares to be thrown into the deep waters of racial politics as Mike Duggan, a white man, seeks to become the first white mayor of Detroit since the historic victory of Coleman A. Young. Additionally, a new national search for chief of police may result in a white chief of police for Detroit.
In a country so defined by race, the election of President Barack Obama supposedly was the dawning of a post racial America. It was the ultimate proof that Dr. Martin Luther King’s 1963 dream had become a reality. America was the land where people were judged not by the color of their skin, but rather by the content of their character. However, almost four years since his election we have seen the demon of racism resurrected as the basis of political posturing. Concerns about the president’s faith, citizenship, vacation schedule and competence mirror the racist mythology of African-Americans as a group that suffers from being deviant – slow, slothful, ignorant and incapable. The president has been described as nice, but not capable. The collective memory of slavery, segregation and degradation at the hands of a perverse and pervasive racist culture provides a tool for translating these innocent words into deep racially charged generalizations the majority culture has long attributed to African Americans. We have been called incompetent for a long time – we have seen this game before. In November, we will discover how far America has come as a nation. In 2013, we will discover how far Detroit has come.

Polls are interesting instruments. Data collection is a tricky science. If a poll suggests that 40 percent of the citizens of the city of Detroit believe their leadership is incapable of implementing the necessary changes for a revitalized and safe city, then that result must be interpreted against this background – most, if not all, of Detroit’s elected and appointed leadership is African-American. The claim for new leadership may be a claim for new people. It may also be code for Detroit needs white leadership, i.e., a white mayor, white city council members and a white chief of police. The word new is not neutral. Against the backdrop of Detroit’s history and current problems, new has a racial dimension that must be explored.

Some might argue that Detroit has not come that far as it relates to combating the reality of racism and a racist culture. Still, one of the, if not the most, segregated places in America, Detroit has a rich history of struggle for minority inclusion and uplift. It embodies the fruits of that struggle and the failure of Great Society public policy to institutionalize a heartfelt passion for equality into law. The failure of legislation, the lack of an urban policy and suburban flight are key features that set the stage for Detroit’s impending mayoral battle. The contrast in this battle will be stark – another black mayor or a new white mayor.

This political battle conjures up all the psychologically demeaning forces of racism latent in Detroit. Unspoken, but some believe that Detroit needs a white savior. The urban legend is familiar, Detroit has been mismanaged and mishandled by a series of black mayors and elected officials. The legend continues. In fact, the blacks were so horrible and corrupt Detroit needed a consent agreement or outside state government intervention to set the city in order. Memories of Kwame Kilpatrick haunt the dreams of some Detroiter’s as they sleep at night; they rant like they are in Nazi Germany shouting, “Never AGAIN!”

Unfortunately, in politics perception is reality. The systemic problems Detroit and other urban centers face in America are much bigger than any personality. In fact, no one person can solve the problems Detroit and southeast Michigan face. It will take a village, a community: business, faith, labor, parents, teachers, and every citizen working cooperatively to accomplish the common good. If the first term of President Barack Obama teaches us anything it is united we must stand – divided we fall. One man, the new leader, cannot fix what a complex series of institutions and history has broken.

Mike Duggan said he is running for mayor because he can do what no one else has been able to do – fix Detroit. After declaring that Detroit suffers from a “sense of hopelessness” Mike Duggan sermonized, “I feel like this is my city.” His potential candidacy reminds me of a scene from The Great White Hype a 1996 film directed by Reginald Hudlin. Although, it will not be lost on black citizens that he is a white man, the color of his skin is not the point. Rather, it is his speech. I fear that what may be lost on ALL citizens is that he is only ONE man. The HYPE is that in order to fix Detroit all we need is one man. Until we begin to reject the belief that one man or woman, despite their race, can save a city or a nation we will continue to be disappointed and stunted in our social and political development.

Polls are interesting instruments. What they suggest is hard to decipher. The point of a poll depends on the questions that were used in the poll and the assumptions of the people who made up the questions. In short, polls are the instruments of the pollsters. If you need to support a story – make up a poll. Maybe what this poll tells us is that the wrong question was asked. The city of Detroit, indeed the United States of America, is a society full of strong institutions that influence our lives. Banks, corporations, government, schools and media all in some part determine what our world and lives look like. Yet, we are not merely passive receivers, we are actors. We have the power and capacity to shape institutions and subsequently change our city, nation and world. It is easy to see the problems we face as simply a result of individual failings and personal problems – some proverbial lack of leadership. However, the problems that Detroit and the nation face are better understood as institutional problems. Our institutions – from the family to the school to the corporation to government – do not challenge us to use all of our capacities to actively engage in contributing to the common good. We are not challenged to do our part. Instead we are encouraged to
look for someone else, the new leader, to fix what all of us have broken and what only all of us together can repair. Maybe there should be a new poll, a poll asking how many Detroiters are willing to stay or return and not fix the blame but fix the problem.