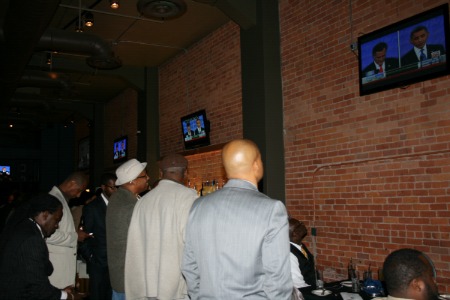 The Detroit panel discussion was heated and lively, something the presidential debate fell short on according to Bankole Thompson, political analyst and Senior Editor of the Michigan Chronicle who lead and moderated the panel discussion.

“I was not impressed,” Thompson said after watching the candidates debate. “I thought it was weak on both sides. The debate here was better,” he said of the pre-debate discussion that took place in the Seafood Market’s PV Lounge.

Before the presidential debate began, panelists jumped into a debate of their own, covering many topics including Romney’s chances of winning Michigan. The point centered on and whether GOP Governor Rick Snyder and GOP presidential nominee Romney were alike. Since Snyder won Michigan over a Democrat, a likeness to Snyder would be a good sign for Romney, pundits said.

Payne said the country was more divided than ever under Obama and compared Romney to Snyder as he is a conservative leader focused on building business and less divisive politics.

Reilly disagreed. “Governor Snyder and Mitt Romney are so different they might as well be different races,” She said on the panel. “Snyder is not like Romney. Snyder is not wishy-washy, he is secure in who he is.” Romney, she said, is not consistent.

Payne then pointed out that Mitt Romney, being a Mormon in America, is a minority in his own right.

“Romney’s a minority,” Payne said. “As a Mormon what [his people] have gone through is very similar to the American Jews.”

Charlie Langston of Talk Radio 1270 WXYT said that race and religion politics don’t matter in this year’s presidential run. “I don’t think people care if someone is Mormon, Catholic, or Jewish because what people want is job security and to keep the lights on,” he said. “This is Obama’s race to lose.”

After the debate, viewers seemed disappointed. Local political analysts shared their thoughts about the candidates’ performances with a consistent theme that there was a letdown on President Barack Obama’s part.
Stephen Henderson, Detroit Free Press columnist, reacted on twitter immediately after the debate, declaring Romney a winner in some respects.

“My call is that Romney won debate on style, but Obama held the line on substance. Better for the challenger.” Henderson wrote. “Romney exceeded expectations, and Obama didn’t meet his. That’s huge for Romney in this race, it’s only way he stays alive.”

Henderson had some tips for Obama on the next round.

“Next debate, Obama needs to punch back,” he said. “Hit Romney on substantive flanks he exposed tonight. The race will tighten before then.”

Henderson was not the only one who wanted to see more offense from Obama.
“When do we get 47 percent? When do we get people dying without the Affordable Health Care Act?” Reilly asked during the debate via Twitter.

Detroit political analyst Steve Hood also said he wanted to see more bite from Obama as well. “He didn’t go hard until after ten o’clock [the last 20 minutes]. I’m thinking, “Where is he? When will he go hard?”

Detroit News columnist Nolan Finley said he was surprised to see Romney’s ease at the debate. “Romney is looking more comfortable as the debate wears on,” Finley said on Twitter. “Not what I expected.”