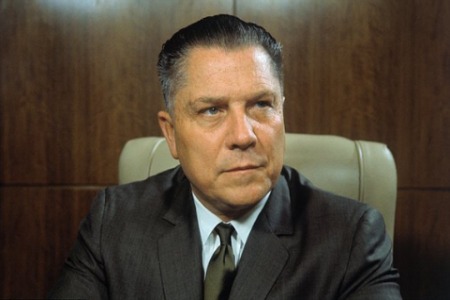 Police in Roseville, Mich. dug up a driveway on Friday and took some soil samples. No findings have been announced yet.

An unidentified man recently told police he saw a man bury something in the driveway, in the summer of 1975, shortly after James (Jimmy) Hoffa disappeared. It was also after he had lunch with Tony Provenzano, a Teamster officer and Tony Jack Gicalone, a Detroit mobster, at the Machus Red Fox restaurant.

Hoffa was last seen in the parking lot of the Detroit restaurant in 1975.

“What happened to Jimmy Hoffa?” is a question that has not been answered since he was missing. Hoffa was the former head of the International Brotherhood of Teamsters and was convicted of trying to bribe a grand juror in 1964, and of stealing from his union’s pension fund.

James Hoffa was last seen in the parking lot of a Detroit restaurant in 1975.

He was pardoned after serving less than five years of a 13-year sentence, and one of the stipulations was he could have nothing to do with his old union.

Myriad rumors concerning his whereabouts have abounded since that time. One of the most famous was a 1989 interview with Tony “The Greek” Frankos, a former mobster, gave saying Hoffa had been fingered by Fat Tony Salerno, a crime boss, because Hoffa refused to expose mob ties in the Teamsters.

Frankos said Hoffa was buried under the west end zone of the football stadium then being built in New Jersey. No traces of him were found there.

There were other tips that he was buried beneath Detroit’s Renaissance Center or dumped out of a small plane into Lake Erie.

Richard Zuckerman, a Detroit criminal attorney who was on the team that investigated the disappearance in the 1970s, calls this week’s dig “lunancy,” and believes Hoffa’s remains were incinerated.

Zuckerman said the public should remember that Hoffa’s death was not a movie crime story–but murder.

Jimmy Hoffa was a tough guy,” said Zuckerman, “who strong-armed people and stole,” but he was never suspected of killing anyone.

Zuckerman said he was in the U.S. Army in Vietnam and learned about families now knowing for sure what happened to their loved one.

“Carrying that pain for 37 years is unimaginable,” says Richard Zuckerman. So he adds, “I don’t make Jimmy Hoffa jokes.”