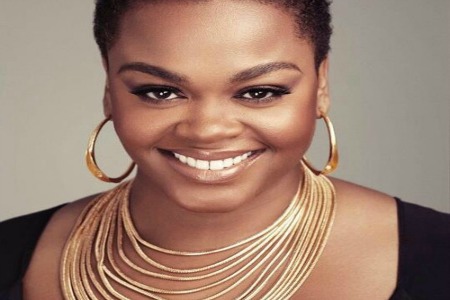 That smile. I could hear it glowing as she called out to her son. He had just woken up from a nap and was searching for her in the house. “Hi snooks,” she said. He followed her voice and wound up in her embrace. Jill Scott’s voice does that for a lot of people–she sings and we come flocking. But lately, Jill has offered us much more than her music. The single mother joined the cast of the Lifetime remake of “Steel Magnolias” as Truvy–a dedicated hair dresser who is enduring the trials and tribulations associated with her out-of-work husband. And recently, the radiant brown bombshell took to the cover of Essence with her natural hair, a sight we don’t see often in mainstream media–but then again–Jill Sott is a walking exception. With the measurements of 12/14, she is considered plus-sized, but that has in no way hindered her career. If fact, to let her tell it…it’s helped.
Jilly from Philly rang our offices yesterday and chatted about Steel Magnolias, her dream role as Phyllis Hyman and the controversy surrounding Zoe Saldana in the Nina Simone biopic.

HelloBeautiful: Tell me about your role in Steel Magnolias as Truvy…

Jill Scott: Well Truvy is a genuine friend to her friends, she is a loving wife who is going through something many women have experienced–when their husband isn’t working, and how it affects him. Not just the financial aspect of it, but the emotional aspect. She truly and genuinely loves her husband and has to weather the storm.

HelloBeautiful: Queen Latifah was nervous about reenacting the famous Sally Fields scene– how did she do?

Jill Scott: I thought she did great. The tears in that scene were genuine; every last one of us fell in love with Candola. We just had to be in that moment–Shelby was gone and there was a physical pain attached to it for all of us–I know definitely for me.

HelloBeautiful: Were you nervous to be involved in the remake of such a classic?

Jill Scott: Yes. They’re big shoes to fill. The story is so good. Friendship is a quality–hell or high water–friendship is not really what we’re seeing on television anymore. For me, it was just an honor to remind people of a friendship that doesn’t have fighting and scratching each other’s eyes out–particularly with African-American Woman, though it goes down on the other shows as well. There’s beefs, wars, threats and jealousy, but this is a good reminder of what friendship actually is. It is a support system; it is a place to go with your whole self and be honest; and be hurt; and not have to do it by yourself–and to heal.

HelloBeautiful: You said you wanted to appear on the cover of Essence with your natural hair so that your son could see the “real” you. Do you feel that Black women don’t show the real “them” enough?

Jill Scott: I do. I would love to see a cast of African-American women with their natural hair. Some are going to be coiled, some are going to be curly, some will be tight, some will be wild-braided-twisted but this is the crux of it, this is who we are, and our hair even has a character in itself. I don’t mind wearing a weave or a wig–I don’t have a problem with it, but when I come home to myself–I’m natural. Hair is fun but I’d like to see who we are. I always think about it like this: if 30 black women were to be lost on a deserted island, those weaves would come out–they would all come out. We’d have to start taking care of our hair, and when the ship shows up two months later, there’s going to be a bunch of African-American woman or African women getting on that boat in all their glory.

HelloBeautiful: You recently came under controversy for a promo photo because it appeared that your were heavily Photoshopped…

Jill Scott: You are actually telling me this for the first time–I didn’t know that. But I assume you’re talking about the Steel Magnolias photo. When we shot “Steel Magnolias,” I was a lot smaller than I am today. I call it foundation, some good foundation (and the proper posture is a part of it as well), but of course there is some Photoshopping. There’s Photoshopping with every photo that comes out on any magazine, or pretty much anywhere.

HelloBeautiful: If you had a chance to play an iconic figure, who would you play?

Jill Scott: I would play Phyllis Hyman. There’s a lot of depth there. Phyllis was tormented and beautiful, and violent at times. She was fighting her way through the industry and it wasn’t necessarily working out. You have this character who loves something so tremendously but hates it at the same time. I find her to be really interesting.

HelloBeautiful: How do you feel about the controversy surrounding Zoe Saldana being casted in the Nina Simone biopic?

Jill Scott: Well Zoe is an incredible actress–I think that she’s a fine actress. I think that there should be some work done, like a prosthetic nose would be helpful and definitely some darker makeup. If Forest Whittaker can become darker in “The Last King Of Scotland” than I believe Nina should be treated with that respect. She was very adamant about her color about her nose about her shape and her self and there needs to be some homage paid to that.

HelloBeautiful: What are some things you would like to see change in Black Hollywood?

Jill Scott: I’m hoping to see more diverse story lines and I’m hoping to see more intelligent films–more variety of stories. People we love pass away; people we love get married and divorced; they have children; we get jobs, we get lost, confused, heartbroken, broke, rich, gardeners–there’s millions of stories to be told about us. I’d just really like to see more stories. And Black actors, it seems like there always one for a period of time then there’s another one…there’s so many Caucasian actresses that get great work. I’m a fan of many of them, like, for instance, Tilda Swinton. She’s an amazing actress to me but I’ve seen her in films where she’s spoken Italian and German; I’ve seen her in a films where she plays a mother of very demoted boy. I’d like to see Black woman in different shapes, sizes and colors, hair grains, and noses, being human beings in front of the camera.

HelloBeautiful: What are some of the downsides of being plus side in Hollywood?

Jill Scott: I’m not sure yet, because most of the roles I’ve acquired thus far–I’ve been either required to gain weight or wear a fat suit. One of my favorite movies is “The Shadow Boxer” starring Monique, who played a crackhead girlfriend. I love that because when you think of crackhead you think of someone who is emaciated, and her boyfriend was Caucasian and young–a doctor and high–more layers.

The challenge that I see outside of Hollywood is just finding clothes. I typically have to buy something two sizes bigger than I am, then I must have it fitted for me. I’m a 12/14 depending on the weight. Also [I need a] director that can know not every angle is for me, they have to be mindful. You know how some actresses have a good side–it kinda works for me like that too.