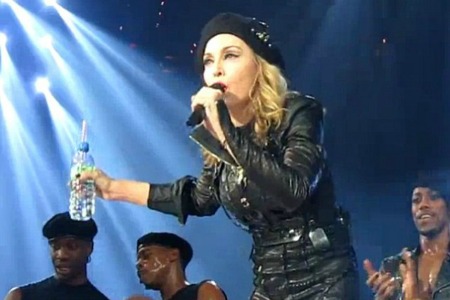 President Barack Obama pulled another high-profile celebrity endorsement this week–though the way in which it was delivered may make the Obama campaign cringe.

Madonna asked her cheering fans during a concert on Monday in Washington D.C. to vote President in November.

Before stripping off her shirt to show her Obama temporary tattoo across the bottom part of her back, she asked fans to vote for “the black Muslim in the White House.” Madonna, in all likelihood, knows that Obama is not a Muslim. But she probably did it to make fun of those who are hellbent on thinking that he is.

Here is some of what she had to say during the concert, according to the Daily Mail:

“It is so incredible to think that we have an African-American in the White House,’ she said as the audience cheered. ‘Those fine human beings did not die for nothing.”

She went on: ‘So y’all better vote for f***ing Obama, okay? For better or for worse, all right, we have a black Muslim in the White House, okay? Now that is some s***. That’s some amazing sh***.

‘It means there is hope in this country. And Obama is fighting for gay rights, okay? So support the man, goddammit!’

She ended her profanity-laced endorsement by saying: “So vote for him, OK godd—it!”