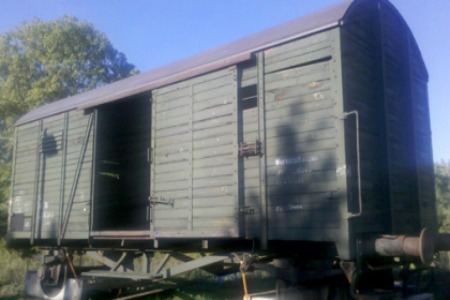 An industrial crane on Monday gently lifted the 27,000-pound railcar inside the Holocaust Memorial Center. It’s one of the last existing World War II boxcars from Germany, used by the Nazis to transport millions of Jews to concentration camps, and ultimately to their deaths.

As a Holocaust survivor it was not an easy morning for Henrietta Weisberg, a donor who, along with her husband Alvin, made the exhibit possible.

She rode on one of these boxcars to the Warsaw ghetto as a little girl, never to see her parents or two brothers again.

“How it was, being in there — one on top of the other, with no facilities, no water, no toilets, people dying all over. It’s unbelievable what one human being can do to another,” Weisberg said.

“Things that I tried to forget are coming back and it’s very difficult,” she said. “But I’m doing it  because it’s necessary — somebody has to. I’m 83 years old. If I don’t do it now, it’ll be too late.”

The permanent exhibit is tentatively scheduled to open in mid-to late-November.

‘They’ll be able to go up to it and touch it, look inside and understand that other people experienced this in a very real way,” Goldman. “And it will make the tour they take from the exhibition, hearing from a survivor later — it will make it that much more real and memorable.”

Get more information about the Holocaust Memorial Center at this link.