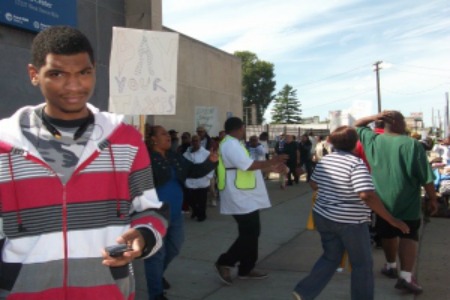 DETROIT (WWJ) – Dozens of people marched outside DTE Energy payment centers on both Detroit’s east and west sides on Friday, speaking out against what they say are unfair practices.
WWJ Newsradio 950′s Florence Walton reported DTE’s on West 7 Mile Road office was temporarily closed Friday as a result of the demonstration.
The group is protesting high utility bills and shut-offs for non-payment, among other things.
Community Activist Brandon Neil said DTE is charging too much for services that people can not live without. ”Kids and the elderly are gettin’ sick, because they don’t have no lights and gas … Do the right thing!” Neil said.
Pastor W.J. Rideout said these protesters are part of the 99-percent.
“We stand against DTE wrongdoing and illegal shut-offs and illegal hiked charged prices in their guestimations of people’s bills,” Rideout said.
A similar protest, drawing a crowd of 200, was held in front of DTE Headquarters in July.
A DTE spokesperson says while there is no guarantee against utility shut-offs for non-payment of bills, the utility has several programs to help customers, including qualifying senior citizens.
https://detroit.cbslocal.com/2012/09/21/crowd-speaks-out-against-unfair-energy-costs/