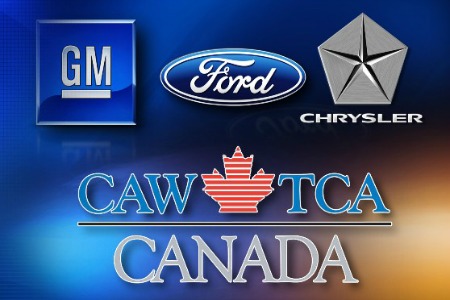 The Canadian Auto Workers hammered out a four-year tentative agreement with General Motors Thursday under the threat of a strike if a deal wasn’t reached by the end of the day.
Ken Lewenza, CAW president, said the GM deal follows the same pattern established in the tentative agreement achieved with Ford Motor Co. earlier in the week.
The union will now turn its attention to talks with Chrysler, the last of the Detroit Three without a labour pact.
“We have Ford establishing the pattern. We’ve got General Motors agreeing to the pattern and tomorrow we go to work with Chrysler,” he said at a late-night news conference announcing the GM pact.
The CAW extended talks with both GM and Chrysler Monday after reaching a tentative agreement with Ford Motor Co. ahead of its midnight strike deadline.
Both automakers had agreed in principle to follow the Ford deal, but the union reserved the right to serve 24-hour strike notice if it felt the talks had stalled with either automaker.
Mr. Lewenza said he hoped strike notice wouldn’t have to be served at Chrysler.
“As long as we’re making progress we’re not interested in pulling the trigger,” he said.
Similar to the Ford contract, the GM agreement lowers entry-level wages for new employees to roughly $20 an hour from $24 and extends the period of time it takes new employees to reach peak pay levels of $34 an hour to 10 years from six.
The deal foregoes cost-of-living increases until June 2016, and employees instead will receive a $3,000 lump-sum payment in year one and $2,000 in the subsequent three.
The new hires will also be moved into a cheaper hybrid pension plan.
In exchange, the CAW said GM has committed to a third shift at its flex plant in Oshawa, Ont., which he said would help the union maintain full employment levels at the company by the end of the contract.
The CAW will hold a ratification vote on the Ford agreement this weekend, and hopes to take the GM contract for similar vote as soon as possible, Mr. Lewenza said.
The union turned the pressure up in the talks with GM Thursday morning by saying if it didn’t have a deal by the end of the day it was prepared to serve 24-hour strike notice.
Mr. Lewenza upped the anti just after 1 p.m. by saying if GM didn’t address the outstanding issues within “two hours,” strike notice would be served.
But both parties returned to the bargaining table until shortly before 8 p.m.
Mr. Lewenza said the primary sticking points were issues of employment security, and the union’s efforts to put further restrictions on GM’s temporary worker program.
Mr. Lewenza said the new contract addresses both those issues, including putting restrictions on the temporary workers so they can only be used for their original intentions, such as during the launch of new vehicles.
https://business.financialpost.com/2012/09/20/caw-reaches-tentative-agreement-with-general-motors/