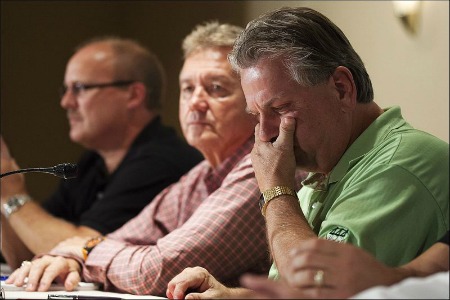 TORONTO, Canada (WWJ) – The Canadian Auto Workers Union is using a unique strategy in its final day of negotiations before Monday night’s 11:59 p.m. deadline in talks with the Detroit three.
Most of the focus today will be with Ford, but CAW President Ken Lewenza says his negotiators will be working simultaneously to pattern any agreements at GM and Chrysler.
“If they’re genuinely interested in getting a deal, we can get a deal with them coinciding with Ford Motor Company because, quite frankly, we have the energy to go from room to room to room to get the job done,” Lewenza said.
Lewenza says he’s told both GM and Chrysler that they better show a desire to have a deal, or union members will withdraw their services at tonight’s deadline.
Chrysler officials have expressed concern about the negotiating strategy.
https://detroit.cbslocal.com/2012/09/17/no-agreement-yet-caw-trying-unique-strategy/