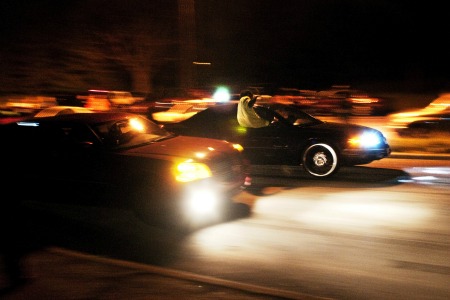 DETROIT (WWJ) – Sheriff Benny Napolean and the Wayne County Sheriff’s Department joined forces with the Detroit Police Department to bust an illegal drag racing operation Saturday morning and WWJ has been told that 30 cars were impounded.
It happened near Joy and Tireman on the city’s west side, however, Paula Bridges spokesperson for the Sheriff’s Department, says it’s going on all over:
“Citizens complain regularly about drag racing going on in their neighborhood,” said Bridges. “It is an issue of danger to the residents who are there and also motorists who are passing by – unbeknownst that this activity is going on.”
“People should know that we are at these events – they think that it’s just the participants, and the visitors. There are officers that are monitoring these activities so they can come back and make the arrests, and make those seizures,” she said.
Three arrests were made in this operation, guns and knives were confiscated, along with small amounts of marijuana and other drugs.
https://detroit.cbslocal.com/2012/09/15/detroit-police-bust-drag-racing-operation/