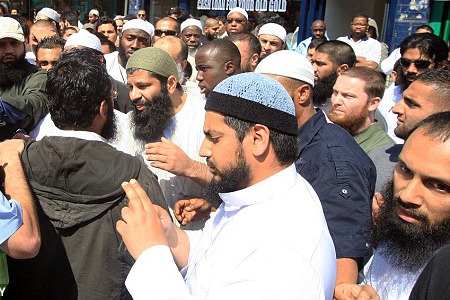 I posted on my Facebook page Saturday afternoon that it’s time for moderate Muslims to call out those extremists in Islam who are using the religion to call for violence and death. One of the reactions to my call was swift: there is no such thing as a moderate Muslim. You are either a full time Muslim or not. That was how one of the postings on my page put it and the individual went on to evoke the war on terrorism, foreign policy etc.  It was almost as if the person was waiting for the opportunity to unload anti-American rants or his views about the United States’ political stance across the globe. Nonetheless I always welcome healthy debates that force us to think critically of the world around us and not to think and act like zombies.  This individual’s reaction to my call for moderate Muslims to step up and not let fundamentalists hold Islam hostage is a sentiment deeply buried in the hearts of some who are looking at the current violence across the Middle East as America’s fault.  The anti-Islamic film created by a California convicted bank criminal is said to be widely responsible for the the violence that has been brought to the doorsteps of some American embassies in the Middle East. And in Libya, where it began, the mob-style violence tragically engulfed the life of an American ambassador and some of his staff.  Like a wild fire it is spreading rapidly across the Middle East.  What can be done about it? One of the answers lie with Muslim moderates – those who believe that violence is not the answer to advancing the cause of human dignity- and addressing inherent socioeconomic ills.  Just as we condemn the actions of Christian extremists who push against religious tolerance by calling for the Muslim holy book, the Koran, to be burned, moderate Muslims must also do the same. They should not let extremists define Islam as a violent religion and exploit the religion to advance their own pathological views. If you are a Muslim who does not believe that crusading for violence and death is the appropriate response to the anti-Islamic film, then speak out. Tell the world that Islam is more than the way extremists are portraying it on television screens across the world.  Certainly the anti-Islamic film poses several challenging questions for us about absolute individual liberty. I’m a big proponent of individual liberty and the right to express one’s views.  But individual liberty becomes a burden sometimes when people use it as a vehicle to convey their prejudice and denounce other people’s existence or belief system. That is what happened in the case of the bank criminal in California who engineered his own crusade against Islam by creating a film that was condescending toward Islam and the Prophet Muhammad.  Therefore when individual liberty becomes a premise for both Islamic and Christian extremists to launder their ill-conceived notions and hatred toward religious tolerance we have to speak out. Men and women of goodwill including Imams and pastors cannot keep silent when dishonest men and women want to rule over religions that have at their core human respect and tolerance. Thus, what is the ultimate human goal as we watch the doorsteps of U.S. embassies in the Middle East come under attack?