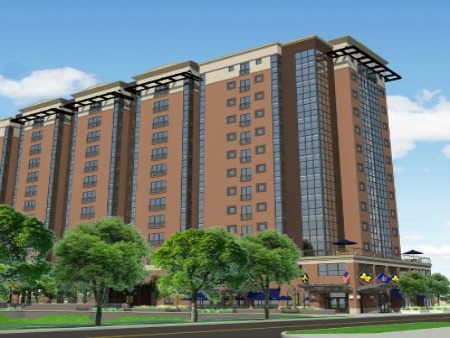 ANN ARBOR (WWJ) – A new proposal to build a $50 million apartment building in downtown Ann Arbor would bring more student housing and encourage greater walkability and density to the South University Downtown Area.
The Gateway at 1320 S. University would be located next to the new Landmark (formerly 601 Forest) building near the corner of Washtenaw and South University. It will make available to residents and students who demand an upgraded housing option that is also located close to campus, the city’s major cultural attractions, employment centers and public transportation network.
With approximately 17,500 square feet on each floor, The Gateway would offer amenities for as many as 500 residents, such as an exercise studio, entertainment center and at least 6,000 square feet of retail space at ground level with an outdoor cafe. Covered parking, below, at and above grade at the rear of the building is a coveted amenity also included in the proposal.
The Gateway was designed by longtime Ann Arbor resident and architect Brad Moore, whose firm, J Bradley Moore & Associates Architects, has designed and planned projects in the Ann Arbor area for more than a quarter of a century.
Artist rendering of the proposed Gateway housing project in downtown Ann Arbor.  Supporters say The Gateway would be another significant catalyst to help revitalize the area for the many nearby shops and restaurants. It could also generate an additional $1 million annually in tax revenue for Ann Arbor.
The proposed Gateway project has the support of the South University Area Association as well as many local businesses and residents.
The 1320 S. University site currently contains Park Plaza Apartments, a small two-story student housing building.
For more information on the project, go to www.yestothegateway.com or visit the Yes To The Gateway Facebook page.
http://detroit.cbslocal.com/2012/09/12/50-million-housing-project-proposed-for-downtown-ann-arbor/