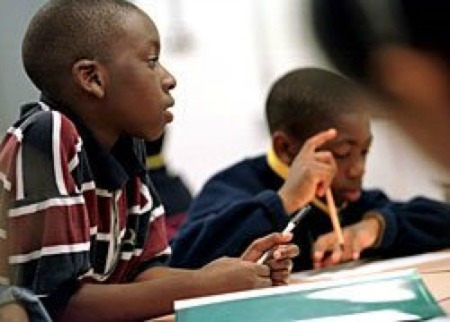 DETROIT (September 6, 2012)  Detroit Public Schools Emergency Financial Manager Roy S. Roberts today announced that the school district had reached nearly 85% attendance on the second day of the school year and that more than 1,600 students had enrolled in DPS schools from charters and out-of-district schools as of Wednesday, Sept. 5.

The attendance mark outpaces recent years when the district reached the required 75% minimum attendance for full state aid purposes in the second and third weeks of school in Fall 2011 and 2010, respectively.

“I’ve said that it’s a new day in Detroit Public Schools, and with this new academic year underway the change can clearly be felt throughout our schools among teachers, principals and staff, families and students,” Roberts said. “As I’ve traveled the district these last two days I’ve seen school buildings that are clean and safe. More importantly, I’ve witnessed a real energy among everyone walking through the doors. That was our goal, teaching and learning from day one.”

On Wednesday, 42,516 students were in attendance out of the 50,420 projected to attend in grades K-12 across 100 schools. Attendance increased by nearly 7,400 students from the first day of school to the second. DPS’ adopted fiscal year 2012-13 budget is based on a fall term enrollment of 49,852 students. The district traditionally witnesses a surge in attendance at the start of the second week of classes.

At 15 DPS schools, less than 25 students were absent on Wednesday, for which Roberts thanked parents for their commitment to educating their kids.

“I urge the parents of those 8,000 students who have not yet returned to classes this fall to get them to classes now and not waste another valuable minute of learning time. We need all students in attendance all day, every day,” Roberts said. “Ultimately, it’s not about the financial loss, it’s about the real reason we’re here—learning. If kids aren’t in school from the very beginning of the school year their entire academic year is affected.”

An additional 6,081 students are on schools’ enrollment rolls, a number which may include students who have transferred and not notified the school. Roberts called on those parents as well to place their students in school or to notify the district that their child has transferred.

As of Sept. 5, a total of 860 students had enrolled in DPS schools from out-of-district schools and 694 students had transferred to DPS from charter schools.

In a district-wide program, which was piloted in schools last year, all schools will begin automated attendance calls today for all students who were absent or missed classes on Wednesday. The system automatically sends notifications each school day to parents regarding each previous day’s missed attendance.

Roberts credited the work of principals, staff and suppliers for summer work resulting in a smooth opening of the new school year with books, supplies and teachers in place, a key factor in ensuring stable enrollments.

For the first time in 2012, the district held an Open Enrollment period in March to allow parents to select schools early. Shuttle busses are operating in particular communities. The district also undertook an intense back-to-school informational campaign focusing on neighborhood-based grassroots and local school activities.

During August, parent organizers knocked on the doors of more than 2,000 parents affected by school transitions and mergers, such as the move of Ludington Magnet Middle School to its newly expanded home in the former Langston Hughes building where today’s announcement was made. Attendance at Ludington has reached 91 percent and enrollment is 20 students above projections. Outreach targeted school populations affected by consolidations, those in southwest Detroit, schools near the city’s borders, and the new Detroit Rising College Preparatory Schools. More than 100 community events were attended over a three-week period in August.

The growing depth of support for Detroit Public Schools’ Back-to-School campaign included the involvement of more than 50 ministers’ wives in attendance on the opening day of school as part of long term partnerships with local schools and churches, pastors and members of the faith-based community.