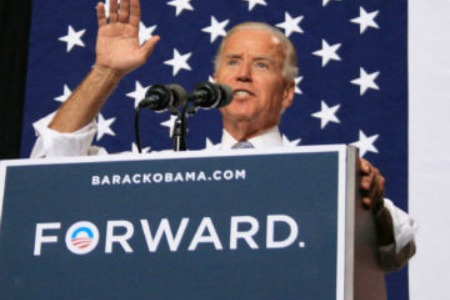 Vice President Joe Biden has become known for his fiery language on the campaign trail. In a visit to Detroit on Wednesday, the VP kept the fire going. Read More:

In doing so, he threw a few sharp zingers at the GOP camp.

Biden said the two candidates have the most differences than any presidential race in his memory, namely on tax policy and healthcare reform.

Then he blasted Romney for accusing him of not knowing the difference between off shoring and outsourcing. Biden told the crowd of more than 300 at Renaissance High School that Romney has promised tax breaks to U.S. companies operating overseas.

“If two workers were talking and one says, ‘My job has been outsourced’ and the other says ‘my job has been off-shored’ … What’s the difference? You don’t have a job.”

He didn’t stop there. Biden went on to tout a crafty slogan for a sticker:

“I’ve got a bumper sticker for you: Osama Bind Laden is dead and General Motors is alive.”

After listing off reasons why Romney is not the pick for middle class people, he said fate of the middle class hangs in the 2012 presidential decision.

He added to cheers from the crowd:

“Romney calls my friend Barack ‘out of touch’…. Uhhh, [who has a] Swiss bank account?”

While he called Romney’s VP pick, Rep. Paul Ryan, a “good, family man” he also was clear that their agenda was very different than Obama’s. He said their budgeting would “kick 19 million Americans off of Medicaid.”

He also said it would slice a half trillion dollars from the budget in tax cuts for 120,000 of the wealthiest families in the country.

The day before he came to Detroit, Biden got some criticism for his hotly aimed comments towards GOP legislators at a rally in Minnesota on Tuesday.

Back in 2008 when Obama tapped Biden for his running mate, pundits declared the Delaware senator Obama’s “fight dog” based on his record of making bold statements.

As the campaign in the Midwest heats up, Romney and Ryan will visit Michigan today.