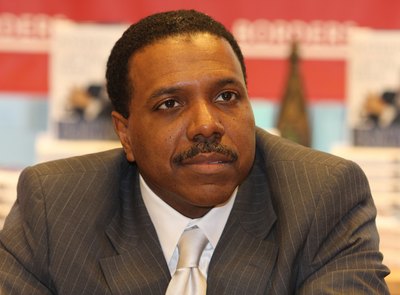 COLLEGE PARK, Ga. — Megachurch pastor Creflo Dollar staunchly denied Sunday that he punched and choked his 15-year-old daughter in an argument, telling his congregation the allegations made in a police report are nothing but “exaggeration and sensationalism.”

“I will say this emphatically: I should have never been arrested,” Dollar said in his first public appearance two days after police charged him with misdemeanor counts of simple battery and cruelty to children.

The pastor got an enthusiastic ovation from the packed church as he took the pulpit Sunday at the World Changers Church International in metro Atlanta. He addressed the criminal charges head-on for several minutes before moving on to his sermon.

“I want you all to hear personally from me that all is well in the Dollar household,” Dollar said.

The 50-year-old Dollar is one of the most prominent African-American preachers based around Atlanta, with 30,000 members in the Atlanta area and a ministry of satellite churches across the U.S.

He was arrested after his 15-year-old daughter called 911 at about 1 a.m. Friday and told a Fayette County sheriff’s deputy that she and her father argued when he said she couldn’t go to a party. A police report says the girl told a deputy her father charged at her, put his hands around her throat, began to punch her and started hitting her with his shoe. The deputy noted a scratch on her neck.

The report said the deputy also interviewed Dollar’s 19-year-old daughter, who said her father grabbed her sister’s shoulders and slapped her in the face and choked her for about five seconds. She said her sister tried to break free, but did not fight back. When her father threw the 15-year-old on the floor, the older girl ran to get her mother. Dollar’s wife, Taffi, told the deputy she did not see the fight.

Dollar launched into a lengthy denial of the allegations from the pulpit Sunday.

“The truth is that a family conversation with our youngest daughter got emotional,” he said. “And emotions got involved and things escalated from there.”

“The truth is she was not choked, she was not punched. There were not any scratches on her neck,” Dollar said. “But the only thing on her neck was a prior skin abrasion from eczema. Anything else is exaggeration and sensationalism.”He said the mark on his daughter’s neck had been there for about 10 years and was caused by a skin condition, eczema.

Dollar’s 15-year-old daughter is the one who called authorities and told them her father punched and choked her. Her 19-year-old sister corroborated the story. But Dollar didn’t publicly display any anger toward his children.

Dollar’s wife, Taffi, is a co-pastor at the church. She addressed the congregation before her husband but did not touch on the allegations.

Dollar’s congregation appeared supportive Sunday, giving him sustained applause as he took the stage. As he spoke, people in the sanctuary yelled encouragement: “We love you!” and “We’ve got your back!” As he talked about the difficulty dealing with teenage children in a “culture of disrespect,” many in the crowd nodded in agreement.

Members of the church seemed to close ranks around Dollar even before he addressed them from the pulpit Sunday. Dozens of people approached by The Associated Press as they arrived for the service declined to comment, and the few who did expressed support. After the service, many were still reluctant to comment, but those who did said they were satisfied with their pastor’s comments.

“When I first heard what he was accused of, I didn’t believe it. I knew there had to be more to the story,” said Phyllissa Wolley, 23, a daycare worker who has attended the church for about five years. “I felt like he addressed the accusations today, and I believe what he said. To hear from him personally, I really appreciated that. I was glad to hear his side of the story.”

Others said the media blew the accusations out of proportion without having all the facts and they felt vindicated after hearing Dollar speak.

“I think you’re looking at a bunch of sensationalism,” said George Blake of Ellenwood, adding that he thought the media rushed to tell the story without knowing the full story. The 49-year-old said he never questioned his pastor of eight years.

“It’s not up to me to me to be satisfied with what he had to say,” Blake said. “This is a man of God spreading the word of God.”

Dollar, who has five children, is a native of College Park and says he received a vision for the church in 1986. He held the first service in front of eight people in an elementary school cafeteria. His ministry grew quickly and the church moved into its present location, an 8,500-seat sanctuary, on Dec. 24, 1995.

Dollar said in a 2007 interview with The Associated Press that he renounced his church salary, and his income only comes from personal investments, including a real estate residential property business and horse breeding company called Dollar Ranch. He’s also published more than 30 books, focusing mostly on family and life issues, including debt management.

He said he also sometimes got up to $100,000 for a single appearance on his packed schedule of speaking engagements.

Along with Bishop Eddie Long, Dollar is one of the most prominent African-American preachers based around Atlanta who have built successful ministries on the prosperity gospel, which teaches that God wants to bless the faithful with earthly riches. Ministers in this tradition often hold up their own wealth as evidence that the teaching works.