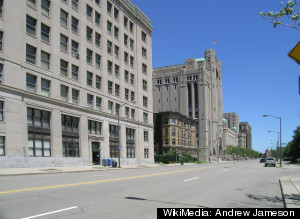 A plan is in the works to pump $38 million into Detroit’s Masonic Temple and the surrounding desolate area.

The investment in the world’s largest Masonic Temple, in the Cass Corridor, is being driven by a team of state and city economic power brokers who are working on the financing and declare the deal could be done by year’s end, according to information that was posted online by the Michigan Magnet Fund.

“At this stage, it is expected the project will be able to close in six to eight months,” according to the memo, written about a month ago, by the Magnet Fund. It’s not clear how long the memo was online, but it was removed Friday after The Detroit News made telephone calls to fund officials.

Plans call for a $9.3 million parking garage, as well as $5 million in inside upgrades that include a new geothermal heating system and more women’s rest rooms.

The once-grand facility has a storied past in Detroit entertainment history, often used by traveling companies of Broadway shows, as well as top musical acts of the day.

The project also calls for $4 million in upgrades to outdoor public lighting and improvements to Cass Park across the street.

The Magnet Fund is a super-committee of state and city economic officials, such as the Michigan Economic Development Corp. and Invest Detroit, that identifies big projects around the state that need tax breaks to become a reality.

The nonprofit fund is run by the MEDC, Great Lakes Capital Fund and the state’s Housing Development Authority. The Great Lakes Fund raises money from socially responsible companies and financial institutions that it then invests in affordable housing and community economic development projects, according to the Lansing-based fund’s website.

Among the other multimillion-dollar projects the Magnet Fund is working on are the David Whitney Building in downtown Detroit, the Knapp building in Lansing, the Cardinal Health Distribution Center in Detroit’s New Center area and the Urban Market in Grand Rapids.

In the case of the Masonic, the Magnet Fund says the project can qualify for federal historic tax credits, federal new market tax credits, state grants and loans. But the Magnet Fund memo said $20 million of the $38 million will come from a “qualified equity investment,” which usually means a private investor who often receives part ownership in the property.

Calls to the Magnet Fund were referred to John Fovenesi, who did not return telephone calls. Public records list Fovenesi as chief financial officer of Halberd Holdings LLC, which oversees projects for entertainment and conference facilities.

The Masonic facility at 500 Temple is in a lower Midtown area, where 22 property deals, often cloaked in confidentiality agreements, have taken place. The prices of some of the publicly disclosed deals have been well above prevailing market prices for an area that is among the poorest in the city.

Some business owners and others in the area say they believe the area near Temple and Woodward Avenue — just east of the Masonic Temple — may be part of the land used for a new Detroit Red Wings hockey arena, which team owner Mike Ilitch says he eventually wants to build downtown.

Temple and Woodward has also been named as a stop for the proposed Woodward light-rail project.

In April 2010, the Masonic Temple and Ilitch-owned Olympia Entertainment ended a two-year arrangement in which Olympia Entertainment managed the venue. At the time, Olympia officials said the firm had invested millions of dollars in the facility and paid off and restructured the debt of the building’s owners.

Masonic President Roget Sobran vowed then the terminated arrangement did not mean the end of the historic structure.

“We are not going anywhere,” he said then.