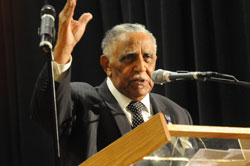 Eye Candy Idris Elba is back on the big screen today in Ridley Scott’s Prometheus. In this film Scott reminds us of the buzz that surrounded his original Alien film back in 1979. Much like he did with that film, Scott has cast this science fiction piece with well-established actors including Academy Award winner  Charlize Theron, Guy Pearce and Michael Fassbender. Fans of the HBO series “The Wire” or the BBC series Luther will be pleased to see Idris Elba take on the role as the captain of Prometheus.

Wanting to know more about Elba, I found some fun facts that you may not know about the former Dunder Mifflin manager:

~ A working actor since 1999, it wasn’t until the 2012 Golden Globes that Elba won a major acting award, beating out Williams Hunt, Hugh Bonneville, Bill Nighy and former ‘Wire’ co-star Dominic West for his role as DCI John Luther.

~ He’s a DJ.  No, really.  He DJ’d in clubs using the name “Big Driis” before he became an actor and he still can occasionally be found behind a turntable.

~ Although he starred in a Tyler Perry movie (2007’s “Daddy’s Little Girls”), he isn’t a fan of Madea and calls the trend of black actors cross-dressing for comedies “buffoonish”.

~ London-born, the actor spends most of his time there but also spends a lot of time in America, not just for acting jobs but because he has a daughter in Atlanta, Georgia.

Be sure to check out Prometheus this weekend! After the movie stop back by  www.michiganchronicle.com to hear my review of the movie and leave your comments on Mr. Elba’s acting skills. @MiChronicle #FeelFridays