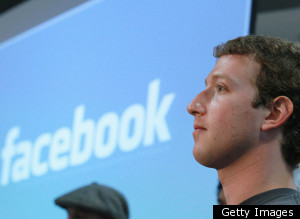 Suing Mark Zuckerberg is turning into a national pastime.

On June 1, three Facebook shareholders — David Goldberg, Kevin Hyms and Garrett Garrison — filed a class action suit against Zuckerberg and his company, social networking giant Facebook, according to court records. The suit accuses Zuckerberg, along with a gallery of Facebook executives and underwriters, of withholding key information from mom-and-pop investors about the true value of the company before its May 18 Nasdaq debut.

If this sounds like a familiar complaint, there’s a good reason. The suit filed by Goldberg, Hyms and Garrison is at least the 13th to be brought against Facebook since the company went public.

“I’m sure there will be more,” said Andrew Goldenberg, one of the attorneys representing Goldberg, Hyms and Garrison, in a conversation with The Huffington Post this week. “This is something that’s affected thousands of people.”

Few initial public offerings have raised popular ire like Facebook’s. The company’s debut was a media event, and according to one estimate, more than 25 percent of Facebook shares went to small-time investors hoping to ride the lightning. But the stock fizzled, and many retail investors took a hit, even as Facebook’s underwriters — a group that includes major financial firms like Morgan Stanley, JPMorgan Chase and Goldman Sachs — made a reported $100 million in profits off the deal.

At issue in the baker’s dozen of shareholder lawsuits is the question of whether Facebook and its underwriters circulated key information about Facebook’s revenue projections to a handful of institutional investors while failing to make the same information available to retail investors.

Facebook’s limp Nasdaq performance has shareholders wondering whether they could have been spared some pain. By the close of trading on Tuesday, Facebook’s stock had fallen to $25.87, a drop of more than 30 percent from its May 18 debut at $38 per share.

The new forecasts were allegedly made known to insider investors, but not to the general public — a distinction that would prove crucial once Facebook went public and its stock sank below expectations.Multiple news reports, many of them citing anonymous sources, have claimed that in the days leading up to Facebook’s IPO, the company and its underwriters had access to revenue forecasts that showed Facebook’s earnings falling off in the coming quarters.

Two of the major reports about the lowered revenue forecasts, from Reuters andBusiness Insider, appeared on May 22. By May 23, shareholders had filed five class action lawsuits in New York and California.

In the days since, at least eight more shareholder suits have appeared.

In a statement to HuffPost, Andrew Noyes, a Facebook spokesman, said, “We believe the lawsuits are without merit and will defend ourselves vigorously.”

Andrew Goldenberg’s clients were among the most recent to bring suit.

“They were confused, frustrated. They wanted an explanation of why the stock was where it was,” said Goldenberg about Goldberg, Hyms and Garrison.

Goldenberg said the three reached out to his office “a couple days after the IPO,” with complaints “based on articles that they were reading in the paper.” His clients were “in shock when they heard that the underwriters were disclosing to the institutional investors, as opposed to these small-time guys.”

At least one of the three men is retired, said Goldenberg, and none of them has a great deal of experience playing the market.

“They are not sophisticated investors,” said Goldenberg. “They go on their Scottrade account, their E*Trade account, and they wanted to invest … They are people who thought they were buying into a company that had a promising future.”

Since filing the suit, said Goldenberg, his office has spoken to other retail investors who bought into the Facebook IPO and claim to have had similar experiences.

His office has “received at least 150 responses” since last Friday and that he has “personally spoken to maybe over 50 people.”“They all tell the same story,” Goldenberg said. “They feel cheated.”