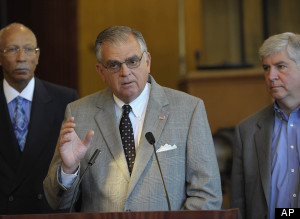 Backers of Detroit’s on-again, off-again light rail project who were expecting some good news Monday may have to wait two months longer for a federal verdict on plans for the city’s privately-funded transportation venture.

U.S. Transportation Secretary Ray LaHood came to Detroit to meet with a group of private investors and public officials who support the proposed 3.3 mile line that would run along Woodward Avenue from downtown to New Center.

In the M-1 Rail investors’ April feasibility report, they announced an existing $84 million in private money committed sustain a large chunk of operation costs for the $137 million project through 2025. They’re also counting on federal funds, about $25 million in TIGER grant and $16 million in tax credits. LaHood expressed general support for the project, but identified several concerns that they are expected to address when they meet again in two months, according to the Detroit News.

“There’s a handful of questions — just four or five important questions — dealing with the operating costs, capital costs and things we should answer,” Snyder said in a press conference. “So I think it’s incumbent on us to take this time over the next 60 days to work hard, just like the good work has been done in the prior period.”

According to the Detroit Free Press, Roger Penske, one of the leaders of M-1, cited the importance of long-term funding for the project and LaHood’s desire to see a management system in place. The regional transit authority is currently up for debate in Lansing.

One of M-1’s supporters who was at Monday’s event, U.S. rep. Hansen Clarke (D-Detroit), said that while he thought there were ways to run the light rail without an RTA, he would be pushing for legislation that would back such a system.

“I believe [the M-1 line] could be the anchor for regional transit in southeastern Michigan,” Clarke said. “It’s the potential it represents; it’s a starting point for a regional transit system.”

Private investors then took on the project themselves, with large donations coming from the Kresge Foundation, Quicken, Compuware, the Penske Corp., Wayne tate University, Detroit Medical Center and Henry Ford Health System. The rail system is expected to cost $5.1 million to operate annually, with 80 percent covered by fares and advertising. In the M-1 rail plan, they would endow a fund to support operations until 2025, at which point it would be handed to a public entity. The proposed Woodward light rail line, which is set to make 11 stops and take about 16 minutes to travel its length, was scaled back from an earlier plan, which would have linked downtown Detroit to its northern border along Eight Mile Rd. In December, the city and state withdrew support for the project, backing a rapid-transit bus system instead.